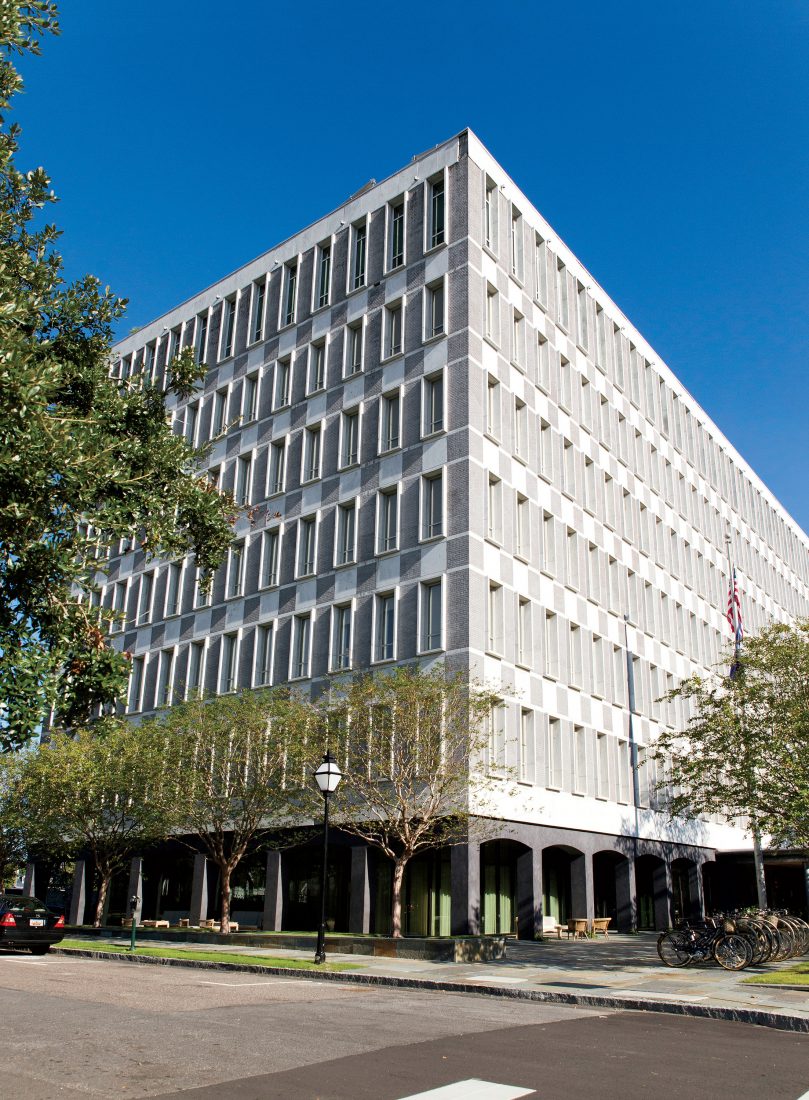 It’s an unlikely redemption story. For nearly two decades, no one in Charleston, South Carolina, mistook 334 Meeting Street for a marquee destination. Completed in 1964, the oh-so-evocatively named L. Mendel Rivers Federal Building—despite its prime perch across from  Marion Square, one of the city’s liveliest public gathering spots—stood derelict and forsaken. After Hurricane Floyd left it ravaged and sodden in 1999, its federal-agency tenants abandoned ship, and years of steam-bath Lowcountry summers took over from there. In 2004, a columnist for the Post & Courier unleashed his thesaurus on the eyesore: “What is the correct word? Hideous perhaps? Not a bad choice, particularly if it can then be made into a usefully descriptive acronym. To wit: Horrid, Idiosyncratic, Detestable, Erroneous, Odious, Ugly and Stinky.” A date with the wrecking ball seemed inevitable.

“A lot of people wanted the building to come down,” says John Dewberry, a fifty-three-year-old Virginia native, former Georgia Tech quarterback, Atlanta-based developer, and part-time Charlestonian. Rather than demolish it, though, he oversaw the transformation of the seven-story ugly duckling into what since its summertime opening has become the newest darling of the city’s current hotel boom: the Dewberry. His company, Dewberry Capital, bought the building at government auction for $15 million in 2007, on the cusp of the Great Recession. He then spent more than four times that amount, and nearly nine years, upcycling it into a 155-room boutique property, with five-star aspirations and a glamour that the Army Corps of Engineers never quite brought to the premises. In itself, the debut of a new hotel barely causes a ripple in Charleston these days; at least ten are at some stage of planning in downtown alone, and the number of cranes looming over the peninsula rivals the number of church steeples that helped earn the Holy City its nickname. What promises to give the Dewberry staying power after the initial buzz subsides is twofold: its ideal location—the Saturday farmers’ market just across the street, the thriving nightlife and shopping of King Street a short walk away—and its obsessive attention to detail.

Exhibit A: the design, whose masterminds (led by Charleston’s Workstead studio) took a deep dive into the building’s midcentury-modern heritage. The bureaucratically boxy brick facade received a gray-lime-wash update that plays up the original white marble accents. The ground-floor bar lounge, dubbed the Living Room, feels like just that. It’s laid out in conversational clusters of mustard-toned sofas, dark leather wingback chairs (designed by Dewberry himself), cubical side tables, floor lamps with hatbox shades, and pillars clad in smoked-glass mirrors. Servers in black cocktail dresses glide around the room while mixologists with white jackets (and the requisite bushy beards) man the brass bar. Sheer curtains front floor-to-ceiling windows, providing a thin veil of separation from the bustle of Meeting Street. Order an old-fashioned, and its block-shaped ice cube comes embellished with an elegantly monogrammed D. The Don Draper/Rat Pack vibe is hard to miss.

The Dewberry’s decor also weaves in plenty of local grace notes. Armoires in the guest rooms are dressed up with botanical-motif fabric created by Charleston artist Becca Barnet, and topped with sweetgrass baskets. North Charleston’s Urban Electric Co. made many of the floor and table lamps (as well as the light fixtures in Garden & Gun’s first brick-and-mortar store, Fieldshop, located in the lobby). Handcrafted wooden bowls containing potted orchids came from the stump of a water oak outside the hotel’s French-Southern brasserie, Henrietta’s. Inside the restaurant, oysters and steak frites arrive on tabletops made of marble salvaged from the walls of the original lobby. (Another thoughtful touch: Henrietta’s keeps handy a velvet-lined case of loaner eyeglasses, for the benefit and bemusement of any diners struggling to read the menu’s fine print.) The Carolina brick around the walled garden out back is 150 years old. The stacks of shelf-worn books on the Living Room bookcase? Dewberry and his fiancée, Jaimie Brown, bought them by the hundreds at a public-library tent sale they stumbled upon while strolling King Street one Sunday afternoon.

Now that the dust has settled on Meeting Street, Dewberry aims to make his Charleston showpiece the flagship of a gradually expanding luxury hotel brand. Next up, pegged for a 2018 opening: the Dewberry in Charlottesville, Virginia, to be housed in another auctioned-off building with a checkered past, awaiting its own painstaking makeover.

“This one was a labor of love,” Dewberry says, adding with a smile, “most days.”