Made in the South Awards: Home

Runners-up: JAO Originals’ sauté pan, a table by Hobgood Furniture, and a chef’s knife by Middleton Made Knives 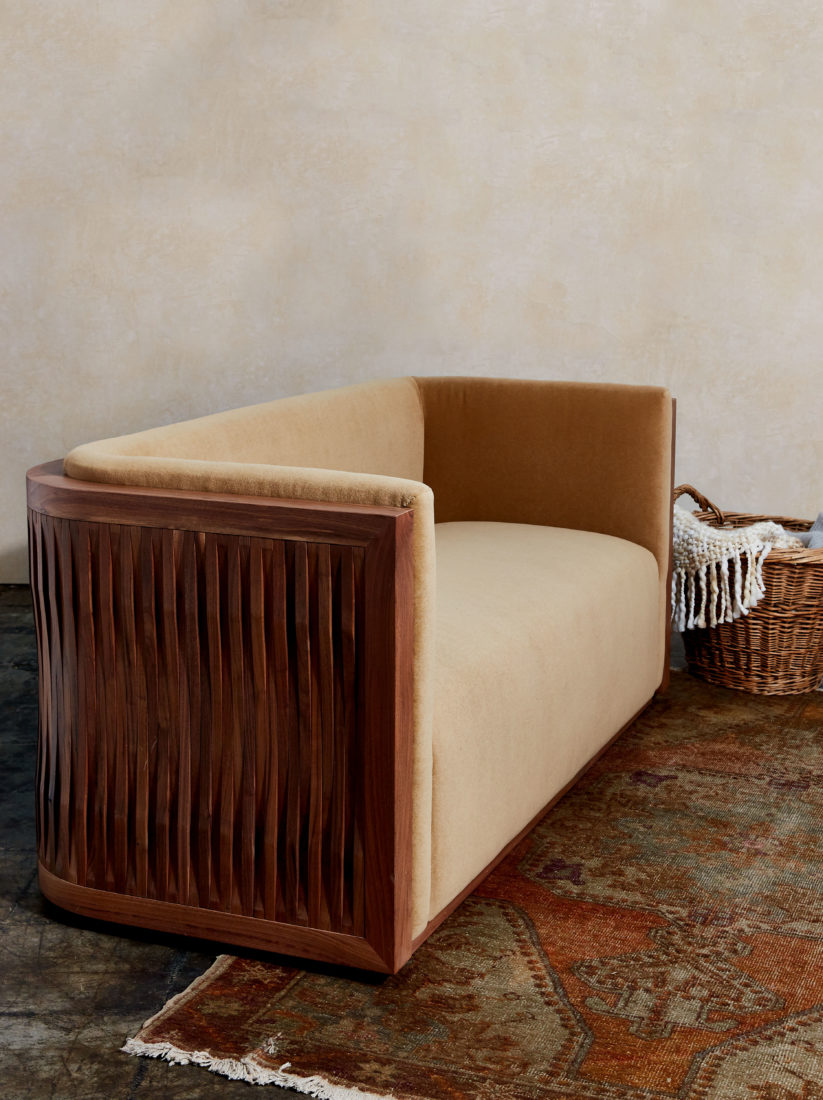 The furniture maker Skylar Morgan’s Arciform Sofa, with its walnut detailing and luxurious Maharam wool-velvet upholstery in warm amber, is an ode to human moments. “My wife loves to have people sit in the living room and talk,” Morgan says. “I’ve always really loved that about her. I wanted to create a little love seat that evokes that feeling of just sitting and talking for a while.” The thirty-six-year-old designer grew up in Montana but found inspiration and an audience in Atlanta, where he opened a woodworking shop in 2003. Even though Morgan’s business has grown into an upscale design studio, everything remains hand built. “When you look at and touch the furniture, there are small inconsistencies, singular handmade details,” he says. “That’s what makes a piece great. If you walk into most high-end furniture showrooms, those are all robot made. There is no human touch.” The exterior pattern of this sofa, which is just over five feet long, would be tough to reproduce by machine—a reflection of Morgan’s outsize (and long-percolating) talent. In high school, as peers struggled to create cutting boards in shop class, Morgan made bedroom sets for his teachers and crafted Queen Anne reproduction rocking chairs. Even then, he knew that his true style was more contemporary than traditional. “To me, modern is edited,” he says. “It’s not what you can add, it’s what you can take away.”

Look carefully at a JAO Originals sauté pan, and you may see faint lines on the bright burnished copper. Those are the subtle tool marks left by Jeffrey Olson, who individually spins and trims each 10½-inch pan in his one-man basement workshop, using a lathe manufactured before 1908. “I myself am a bit of a fossil,” says Olson, who’s all of forty-six. “Metal spinning just fits me, but it’s dying out.” Olson learned to shape metal as an aircraft structures mechanic and later taught himself to spin—a process in which a flat piece of metal is molded around a rotating round form. While mass-produced copper pans usually have stainless-steel linings that degrade with too much heat or time, Olson’s pans instead feature a long-lasting,
hand-applied tin lining that is nonstick and easy to clean. The Hobgood Belly Table, with its dark wenge-wood top, sculptural lines, and cast-bronze legs, is strikingly modern but also warm and familiar in a way that subtly evokes its North Carolina roots. Tom Hobgood, who opened his custom woodworking shop in Charlotte in 1990, builds the tables, and obtains the legs from Raleigh metal artisans; his nephews Paul and Patrick Hobgood, who work at an architectural firm in Raleigh founded by their father, dreamed up the design. A childhood home filled with Dad’s midcentury furniture and Mom’s antiques informs the piece’s extraordinary style. “We’re operating in a realm between modern influences and traditional Southern ones,” Paul says. “I think we’ve come up with a piece  of furniture and an aesthetic that are suspended between the two.” Such notable chefs as Michael Chiarello, Nancy Silverton, and Gramercy Tavern’s Michael Anthony have all bought knives from Quintin Middleton, who crafts them in a backyard studio in tiny St. Stephen, South Carolina. It takes Middleton about four hours to smith a single blade; next, he chooses the perfect handle material, often maple burl dyed an eye-catching purple, yellow, or green. “It’s almost like each knife has its own personality, its own style or swag,” Middleton says. His eight-inch steel chef’s knife is a great all-around kitchen tool with razor-sharp precision and lightness, an indent in the handle for a comfortable grip, and a handsome, curving profile. “When you’re cooking, the eight-inch is what you’re going to pick up nine times out of ten,” he says. “Any task in the kitchen? You’ll want that knife.” Bobby McAlpine, architect and founder, MCALPINE, Montgomery, Alabama: “I am always looking for that thing that makes me wish I’d done it,” says McAlpine, the renowned architect whose regionally inspired retreats have appeared in the country’s top home magazines and filled the pages of three design tomes. While judging this year’s Made in the South Awards, he discovered plenty to envy. “Among the entries,” he says, “I found an elegant table so instantly classic that I couldn’t believe it was only just now entering the world.” Made in the South Awards: Style Made in the South Awards: Crafts