Fresh off the release of the Avett Brothers’ new album Closer Than Together, the singer-songwriter and frontman shares his large-scale oil paintings in a new exhibit at the North Carolina Museum of Art in Raleigh “We all lean toward different languages,” says Scott Avett, who is probably best-known for his fluency in music. Ten studio albums and rowdy live shows have rightly made the Avett Brothers a household name for Americana fans. But as his band readied their latest album Closer Than Together, released earlier this month, Avett was also preparing to share work in another language: oil painting. He earned a BFA from East Carolina University before becoming an internationally-known musician, and from now until January 19, his work will be on display at the North Carolina Museum of Art as Scott Avett: I N V I S I B L E. The pieces in the exhibition, which includes many large-scale oil portraits, portray heartfelt individual reflections on love, loss, and family. “The band is really a family in itself. There is a family of folks that put together our songs, and that camaraderie is crucial,” says Avett, whose work has graced the covers of several Avett Brothers releases. “But for me, painting is much more of a single, observational perspective. It’s me looking in on something. And it comes a little more naturally.” Garden & Gun caught up with Scott to talk about his work as a visual artist, from doodles in high school classrooms to concepts for album covers, as well as the artistic process behind Closer Than Together. Read the interview and preview the exhibit below.

How did you get started with visual art?

Well, I was a terrible student in high school—and before that, too. [Laughs] But I always doodled, always liked to draw. It came naturally to me. So when it came time to make a decision about whether I was going to continue my education after high school, East Carolina University had an art school that seemed to get a lot of positive attention, and it was also the only university that accepted me. So with those two things, it seemed to be a no-brainer. So I went and studied art. But it wasn’t a constant journey for me. I got out of the art program after the first year, and ended up back in it through the guidance of professors who actually said, ‘You were born to do this. You have to get this degree. You have to follow through.’ I started oil painting, and right off the bat, it was just something that made sense. That would’ve been 1999-2000. And that was it. I painted from then on. Is there anything that you learned in your formal education that you apply as a songwriter?

Yeah. I’m sure there’s a list of things, but one that’s really deeply integrated into everything I do is the idea of bringing work to a finishing point before stepping away from it or setting it down. Across the board, the approach to painting was to not overdevelop one part of the canvas more than another; everything was developed at the same pace. I used that in a lot of aspects of my life, definitely in songwriting. For example, I have a love-hate relationship with these voice memo things on our phones. There’s something about the glorious fragment that you can make with it. But then you put it away, and a lot of things have to line up for it to become a priority again. It really promotes more unfinished work than it does finished. But when I commit, real things get done. You created the album cover art for Closer Than Together,  which was released earlier this month. What was the creative process like—did the art or the music come first?

This album in particular had more versions of the cover than normal. I spent many hours testing—‘What is the concept? What is the theme? What is the summary?’—trying to identify the visual accumulation of this record. The more I worked on it, the more it was clear that the hope, the aspiration, was that we might make something that people will gather around, rather than use to cut or divide. We wanted this to be a reflection of our unity—not just a description of unity, but an example of it, in its ugliness and its goodness. So there was a lot of meshing of things, and there were a lot of ways that could have been right, but we came to this blend of Seth and Bob [Crawford, bassist] and I on our journey, this collage of us as one. The cover art for Closer Than Together, which was released on October 4.

Aside from portraits and faces, which appear a lot of your art, what inspires you visually?

Certainly other artists influence me and inspire me—it’s just like anything, you see it and you say, ‘Well, I want to go do that. I want to use that color, but what do I do with that color? Can I even make that color?’ I go to museum galleries when I can. Nature is probably the most vibrant of anything. I can look at a painting, and figure out, more or less, how it went down. But I can’t explain how that sky just did that, or this tree is doing this, or this flower is doing that. I think that is the epiphany part. That closer-to-the-mystery thing that speaks to the natural beauties of childhood and of foliage and animal life. Is painting a release for you when you’re busy touring and recording?

There’s no one activity that I do that is more therapeutic than another. If I’m present, I could be on stage screaming and it could be therapeutic. It’s really a matter of just being awake to what I am and where I am, and painting is just another thing like songwriting has been—something that I believe I was born to do. I don’t know a whole lot, but I do know that on a good day, I can form shapes on a canvas. It’s one of my languages and one of the ways that I live life. 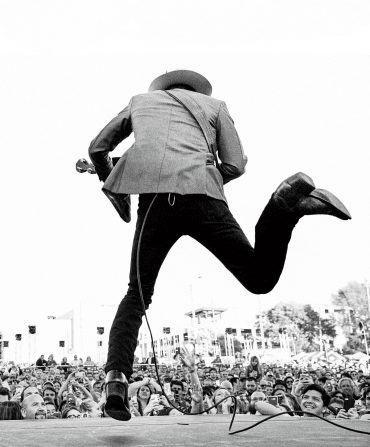 The Avett Brothers Open Up in an Intimate New Documentary