Shrimp and grits may be a restaurant-menu classic now, but for a time in the early 1900s, it was customary to encounter shrimp atop a Charleston waffle, a sour cream-enhanced version of the breakfast staple that was chronicled by newspapers across the country. Happily, grits are the starch that stuck with Southern seafood lovers, as chefs took their cues from Bill Neal at Crook’s Corner in Chapel Hill, North Carolina, who brought the combination to national prominence in the 1980s.

Now Southern diners from the far western Gulf of Mexico to the Chesapeake Bay regularly savor the humble surf-and-turf, with the complementary sweetness of shrimp and corn comingling in their bowls. Those titular ingredients tend to be the only thing that any two versions of the Lowcountry classic share. Sometimes the grits are enriched with cheese; sometimes they’re not. Sometimes the dish is sauced with brown gravy; sometimes the finishing touch is closer to tomato sauce.

True to the rule, the following shrimp and grits are wildly different from one another. But they have deliciousness in common.

If Big Earl’s name is on a dish, that’s a pretty good indicator it’s a long way from healthy: The panhandle musician and Flora-Bama mainstay recently hosted a 0.5 K relay race with doughnuts at the finish line. His namesake shrimp and grits is built on a base of gouda grits and saturated with bacon cream sauce. But it’s the pink shrimp plucked from nearby waters that make the preparation a contender for best dive bar shrimp and grits on either side of the state line.

Classically-trained chef Chris Williams in 2011 embraced the kind of cooking championed by his great-grandmother, Lucille Smith, inventor of the nation’s first hot roll mix and the first food editor of Sepia magazine, a Fort Worth-based magazine that chronicled the achievements of African Americans. Williams’ Southern menu includes a distinctly Texan take on shrimp and grits, centered on a helping of alluringly supple stone-milled grits. Surrounded by sherry-tomato broth, this celebration of brawny Gulf shrimp gets a crowning flourish of andouille sausage.

There are chefs who lean hard on bacon when making shrimp and grits, but that crutch isn’t available at this beloved neighborhood joint: Like many soul food joints, Narobia’s has struck pork from its menu, in deference to health concerns within the greater African-American community and Muslim dietary restrictions. Renee Reid’s peppery shrimp gravy has a vegetal gloss that flatters the tender shrimp she serves. And while she’s justly proud of the restaurant’s French toast, the place is partially named after the creamy grits for which customers line up on weekends.

While local shrimp are a given in the South’s finer restaurants, South City pays special attention to the grits beneath its kitchen’s acclaimed smoked tomato-poblano gravy. The restaurant, which now buys its grits from South Carolina’s Geechie Boy Mill, favors a blend of white and yellow grits, so patrons get a taste of earth and elegance in equal measure. The grits are slowly cooked with cream to quiet the hot pepper in the sauce.

The appeal of shrimp and grits doesn’t fade away from the coast, and fortunately for mountaineers, neither does the ability to come up with a memorable interpretation of it. At Sunny Point, the all-day dish gets a boost from new world flavors and old-world technique. Yellow stone-ground grits, embroidered with chipotle pepper, provide the foundation for blackened shrimp and roasted tomatoes; they’re sauced with a blend of white wine and locally-made Lusty Monk mustard. 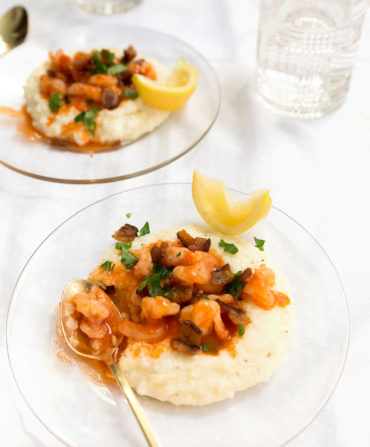