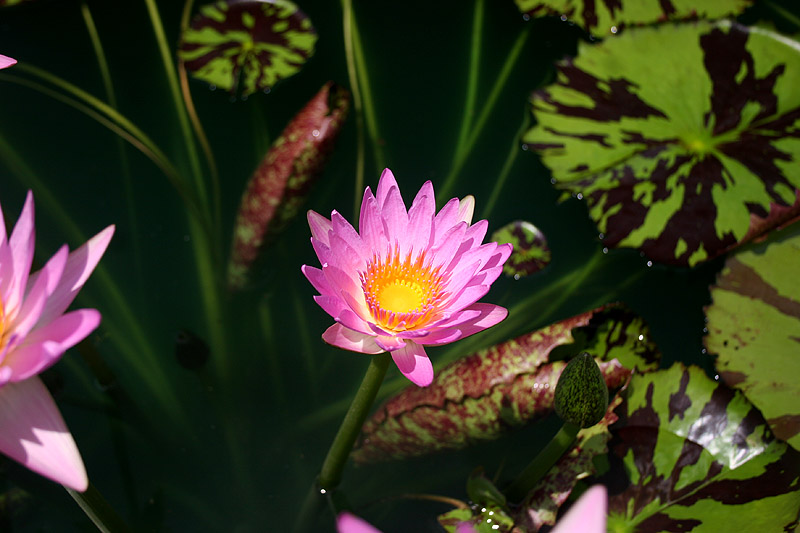 Few may think of San Angelo, a hot, semi-arid city on the Concho River in West Texas, as a sanctuary for Nymphaea—water lilies—and yet that’s precisely what it has become. Every year between March and late fall, horticulture enthusiasts from around the globe visit the International Waterlily Collection, which is home to the largest collection of water lily varieties in the world.

The garden, which is free and open to the public, and this weekend hosts its annual Lily Fest celebration, was the life work of Kenneth Landon, a San Angelo native who passed away this summer at the age of seventy four.

In the 1970s, Landon worked at the University of Texas to obtain rare Nymphaea for its collection. Over years of daring adventure and dogged dedication, he became known as the Indiana Jones of water lily collecting, traveling the world in pursuit of the rarest, most sought-after water lilies on earth. His travels took him to far-flung jungles, rivers, and swamps from Madagascar to Zanzibar, Australia, and Japan.

“When you hear stories about Ken, they sound so far-fetched until you start meeting people around the world who say, ‘No… he did that,’” says horticulturalist Chase Twombly, who worked alongside Landon for more than two decades. One such story: In the 1970s, Landon traveled to Mexico in search of the ‘Star of Mexico.’ While many believed the variety to be extinct, he found it growing from an unmapped, hidden lagoon infested with leeches and brought home enough plants to propagate.

In 1986, the San Angelo City Parks Director asked Landon to beautify a run-down reflecting pool in his hometown’s Civic League Park. Noticing the conditions were well-catered for water lilies, Landon proposed displaying his growing collection. Today, that display has grown into a permanent exhibition featuring tropical and hardy water lily varieties from around the world, along with hybrids, many of which Landon hybridized himself. “It takes knowledge, finesse, and time … that in my mind is the true magic,” says Carl White, San Angelo’s Parks and Recreation Director. Often, Landon would name his creations after friends and family, such as a 1984 hybrid with violet, star-shaped flowers, dubbed ‘Rhonda Kay’ after his two sisters.

Between potting and collecting seeds, combating insects, diagnosing diseases, assessing fertilizer needs, and maintaining a healthy water ecology, Landon devoted his life to these plants. “His flowers were his children and he loved to share them with anybody,” says Laurie Dicello, a member of the Parks & Recreation Advisory Board.

For years, he shared his passion with students from the neighboring high school, which Landon recounted in a 2003 article from the San Angelo Standard Times: “There was this young girl—probably 17—holding these seeds in her hands,” he said. “There she is in the springtime of her life holding some of the last of their kind in the world…And that just struck me.”

As the President of the International Waterlily Preservation Repository, Landon worked with countries around the world to bring rare and endangered species into the collection. In 1994, officials from Egypt visited the city after learning Landon had seeds of the ‘Sacred Blue Lily of the Nile,’ which was once worshipped by ancient Egyptians. For years, that variety had been vanishing from the Nile River and Landon was able to supply and send millions of seeds to re-propagate them there. “Let me tell you something,” says Larry Jolley, Landon’s best friend and executor. “He could stick his hand in his pocket and pull out a handful of stories.”

Today, every year from spring to fall, roughly three-hundred technicolor varieties of water lily flowers open and close here like magic. ‘Fairy Skirt’ and ‘Yellow Queen,’ ‘Blue Cloud’ and the gigantic ‘Victoria amazonica,’ which, at up to eight feet wide, is the largest water lily on record. “Their blooms are the most aromatic in the whole garden,” Twombly says. “It engulfs the park. It’s just wonderful, like a piña colada.”

We stopped at a pond filled with one of Landon’s most notable hybrids, the ‘Texas Dawn,’ which was designated the official state Water Lily of Texas in 2011. “It may be illegal to pick a bluebonnet, but the Texas Dawn are okay,” Twombly assured me as he leaned over the pool’s edge. Dipping his hand in the water, he plucked a stem and offered it over. The flower’s buttery-yellow petals trembled as I brought them to my nose and inhaled the citrusy perfume.

Today more than ever, I am grateful for this living, breathing West Texas sanctuary. While Landon’s death has left an irreplaceable void, the community that knew and loved him here are committed to caring for the collection. “We were some of Ken’s closest friends and we’re fortunate and blessed enough to keep this going,” Twombly says. “We will keep this going.”