The Show Goes On for Vintage Southern Theaters

A new age dawns for the South’s grandest venues Built in 1926, Florida’s Tampa Theatre is a landmark in the city’s Uptown District.

When a new wave of Southern theaters lit up downtowns in the first decades of the twentieth century—vaudeville playhouses in the early 1900s and movie palaces in the 1920s—no expense was too great. Intricate plasterwork decorated opera boxes and prosceniums, crimson velvet curtains and matching seats adorned auditoriums, and orchestras and Wurlitzer organs played scores for silent movies. But as TV rose to prominence in the second half of the century and ticket holders relocated to the suburbs, these once-grand show places fell on hard times, threatened with becoming adult movie houses, storage spaces, even parking lots. Today many of the South’s cherished theaters are in the midst of a resurgence that’s bringing both long-overdue updates and a newfound respect for the role a theater can play in the life of a community (something viewers don’t experience streaming Netflix at home). Atlanta’s Fox Theatre has even developed a foundation to help other threatened gems throughout the region, providing more than $1.6 million in grants since 2008. “We know from experience how a healthy, restored theater can be infectious on a Main Street,” says Adina Erwin, the Fox’s chief operating officer. Save a seat this fall at one of these recently restored and stunning survivors, where the show indeed goes on—with some modern surprises. Patrons mingle in the lobby at the Fox in Atlanta.

“Talkies” had not yet become the standard when the Byrd showed its first movie, in 1928. Instead, silent films borrowed sound from a mighty four-keyboard Wurlitzer organ built directly into the stage and attached to a grab bag of noisemakers including a marimba, sleigh bells, tambourines, and a train whistle to enable a one-man soundtrack. To add to the drama, more than a dozen Arthur Brounet murals depicting mythological allegories and a mountain landscape at sunset decorated the walls, alongside intricate painted plasterwork by the Italian artisan Ferruccio Legnaioli. Unlike many of the era’s palatial theaters, the Byrd has operated almost continuously as a movie house since its founding, but the decades took their toll, and 2017 brought some much-needed updates, including new seats and improved access for people with disabilities. A second phase of planned upgrades will bring beer and wine sales, modernize the lighting, and introduce new programming ideas  to attract younger audiences (November’s Big LeByrdski Festival celebrating the cult classic The Big Lebowski has been a popular ticket). “We want future generations to continue to experience film as a communal art form,” says Gibson Worsham, the Byrd’s former president and a member of its restoration committee. “All in a place that’s designed for it.”

Showing this fall: The Byrd will screen the 1925 silent film The Phantom of the Opera on October 25, with Michael Britt accompanying on the Wurlitzer. 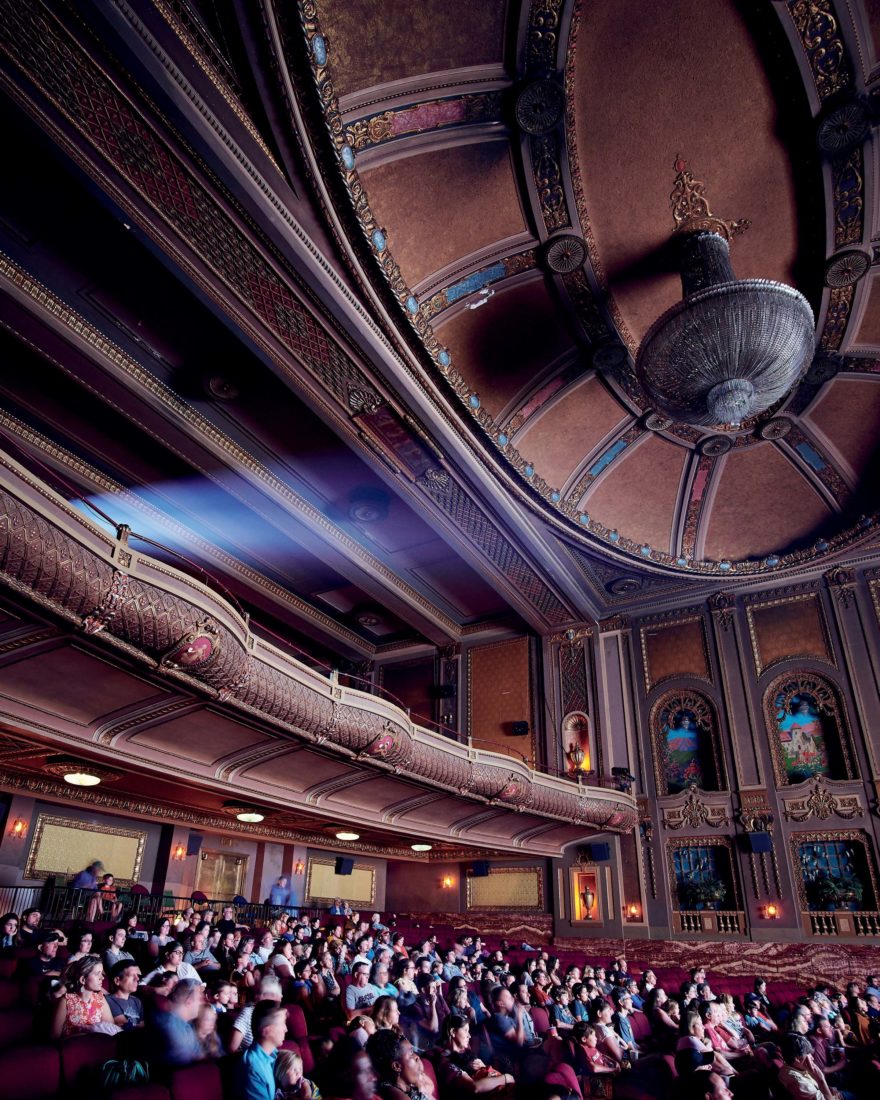 A full house at the Byrd in Richmond

The “Showplace of the Carolinas” opened on Halloween night ninety-two years ago, dazzling theatergoers with an exterior Greek temple–inspired design. The stately Carolina weathered the Depression and World War II but struggled by the 1970s, when developers sized up the spot for a parking lot. Mercifully, Greensboro’s United Arts Council rallied in 1976 to save the landmark, which has since thanked patrons season by season in its role as a beloved community performing arts center. Although the stage draws national names such as Rosanne Cash, nonprofit groups put on about 60 percent of its events. The Carolina underwent a $2 million floor-to-proscenium face-lift last year, and 2020 will bring updates to the Crown, an intimate performance space at the top of the building where up-and-comers such as  Rising Appalachia and Americana singer Emily Scott Robinson hone their styles.

After checking plaster upkeep and seat and sound improvements off its to-do list during a campaign that stretched across the 1970s and ’80s, the Fox is now focused on another aspect of preservation: “At the end of the day, the goal is to make sure the Fox Theatre is here for future generations to enjoy, and that means you have to make sure this historic building stays relevant in the changing market,” says the COO, Adina Erwin. To that end, the Fox introduced the Marquee Club in 2018, a $10 million expansion into a former jazz club next door that swaps popcorn and Milk Duds for cocktails, charcuterie, and red velvet cupcakes. Five bars spread across three levels and onto the rooftop, where guests can now perch for the first time in fifty years and soak in views of Midtown and the Fox’s twinkling marquee.

Showing this fall: Grab an old-fashioned made with local ASW whiskey from the Marquee Club before one of the Avett Brothers’ two shows at the Fox on November 21 and 22. The Lyric sits on what was once the line of demarcation between downtown Birmingham’s black and white business districts. “The seating was segregated, but it was one of the very few theaters at the time where blacks and whites saw the same shows at the same time for the same price,” says its executive director, Brant Beene. “The whole community looks at the Lyric as a place it can call its own.” In the latter half of the twentieth century, it teetered among identities as an independent film house and at one point an adult movie theater before eventually shuttering. In 1993, the crumbling theater sold for just ten dollars to the nonprofit group Birmingham Landmarks. “The roof had a huge hole in the middle, and rain rotted all the floors and seats,” Beene says. “It was never air-conditioned, so you can imagine the musty odor.” Although it would take more than twenty years, $11.5 million in fund-raising, and a major restoration, on January 14, 2016, the Lyric reopened to a capacity crowd—102 years to the day after the curtain first rose.

A fire scorched the Maryland Theatre in 1974, but the auditorium and its angel-laden balconies and intricate red-and-gold proscenium remained unscathed. So while the gem of downtown Hagerstown was able to reopen in the late 1970s, continuing to showcase the Maryland Symphony Orchestra, community theater productions, and traveling acts, the rest of the building remained a shell of its former self: The lobby could hold only about a hundred people, and the box office and concession stands sat at a different address down the block. But on October 11, the Maryland Theatre Association will cut the ribbon on a thirty-thousand-square-foot expansion that restores the original footprint, adding a new box office, airy lobby, and cocktail lounge all under one gilded roof. Now patrons can freshen up and order a drink without missing a minute of the second act.

Showing this fall: The Russian Ballet Theatre stops in Hagerstown on November 7 to present an updated version of Tchaikovsky’s Swan Lake, with hand-painted sets to match the Maryland’s revived splendor.

The Orpheum has long stood at the center of music history in New Orleans. “We’re footsteps away from the Storyville district, where people like Louis Armstrong got their start and participated in the formation of jazz,” says Ivy Mouledoux, the theater’s general manager. Today’s acts still write their legacies at the Orpheum—whether the hometown Revivalists and Louisiana Philharmonic Orchestra or such out-of-town greats as Gov’t Mule and Dwight Yoakam. After Hurricane Katrina sent water gushing through the bottom floor, the Beaux-Arts-style theater spent ten years at a standstill until a $13 million overhaul in 2015 restored the auditorium and brought the seats, restrooms, and concessions up to modern standards—plus added a new adjustable floor that can rearrange the auditorium for concerts, theater productions, weddings, and even Carnival balls.

Showing this fall: Best known for its musical roots, the theater was also once a movie palace and will honor that history by hosting the opening night of the New Orleans Film Festival on October 16. A gospel choir graces the stage at the Orpheum in New Orleans.

Intended by its Eastern European–born architect, John Eberson, to evoke a Mediterranean courtyard, the Tampa Theatre’s auditorium sports statues, columns, and gargoyles, and a faux night sky twinkles down on moviegoers. After more than ninety years of continual use, in 2017 the Tampa underwent a $6 million restoration that included a paint analysis of the reds, greens, golds, and blues that cover the plasterwork; new carpets and drapes; and wider and comfier seats inspired by the originals—only this time, with cup holders. “The architecture is spectacular,” says John Bell, the theater’s president and CEO. “That’s a big reason this building was rescued. But I think just as important is the humanity that’s represented. When you walk in, you’re in the company of the millions of people who have ventured through these doors before you.”

Showing this fall: The Tampa hosts a classic-scary-movie fest in October. Fittingly enough, employees have reported ghost sightings in the auditorium, the mezzanine, and the projection room.

Built in 1949, this Mexican American movie palace is undergoing a $23 million rehab that includes restoring murals depicting the histories of Texas and Mexico. When the Latino arts venue reopens, Texas Public Radio will also call it home.

Once a popular train stopover, Bluefield, known as Little New York, boasted four major theaters. Today only the 1920s Granada still stands, and a local preservation group rallied the community to restore the aging building and repair its Wurlitzer organ.

Constructed during the late 1920s oil boom and a shining example of Classical Revival architecture, the Rialto will soon embark on a top-to-bottom renovation and plans to add an adjacent art gallery.