The story behind two images of the Thirsty Beaver Saloon

The rock star waited until the following morning to post the picture, knowing that pushing it out to his five million followers in real time very well could have caused a frenzy. Hardly what he was looking for the night before his band’s big concert in the football stadium. In his six-plus decades in the spotlight, he’s learned better.

In the photo, he’s dressed in dark tones, that he might blend in with the night itself, a baseball cap pulled over his famously floppy hair, and he’s leaning against an outdoor high-top, sipping a bottle of beer that couldn’t have set the legendary frontman back more than two or three dollars. On either side of him, regulars sit, enjoying drinks and laughs on a warm fall evening, some of whom are no doubt lamenting the fact that they couldn’t score tickets for the rock star’s concert at the football stadium the following night, others wishing their tickets could be closer to the rock star.

“Out and about last night in Charlotte,” read the caption that Mick Jagger posted to his Twitter and Instagram accounts, along with that photo of him outside one of Charlotte’s most beloved dive bars, the Thirsty Beaver Saloon.

No one knew he was there at the time; not the bar’s owner, who had run home to put his daughter to bed; not the bartender, who likely sold the drink to Jagger’s handler (and ersatz photographer); not the half dozen patrons who sat mere feet away from one of the planet’s most famous people.

In the fourteen years since co-owner Brian Wilson opened the Thirsty Beaver with his brother, Mark, the best month they ever had was the one following Jagger’s candid photo. And to this day, almost six months later, the effects of one rock star enjoying one beer at this diminutive joint are still bolstering the Beaver’s till. “People come here straight from the airport,” Wilson says. “They order one drink and buy ten T-shirts.”

Jagger’s, however, is just one of the two photos that Wilson thinks best represent the spirit of his bar. The other most often elicits comparisons to the Pixar movie Up. 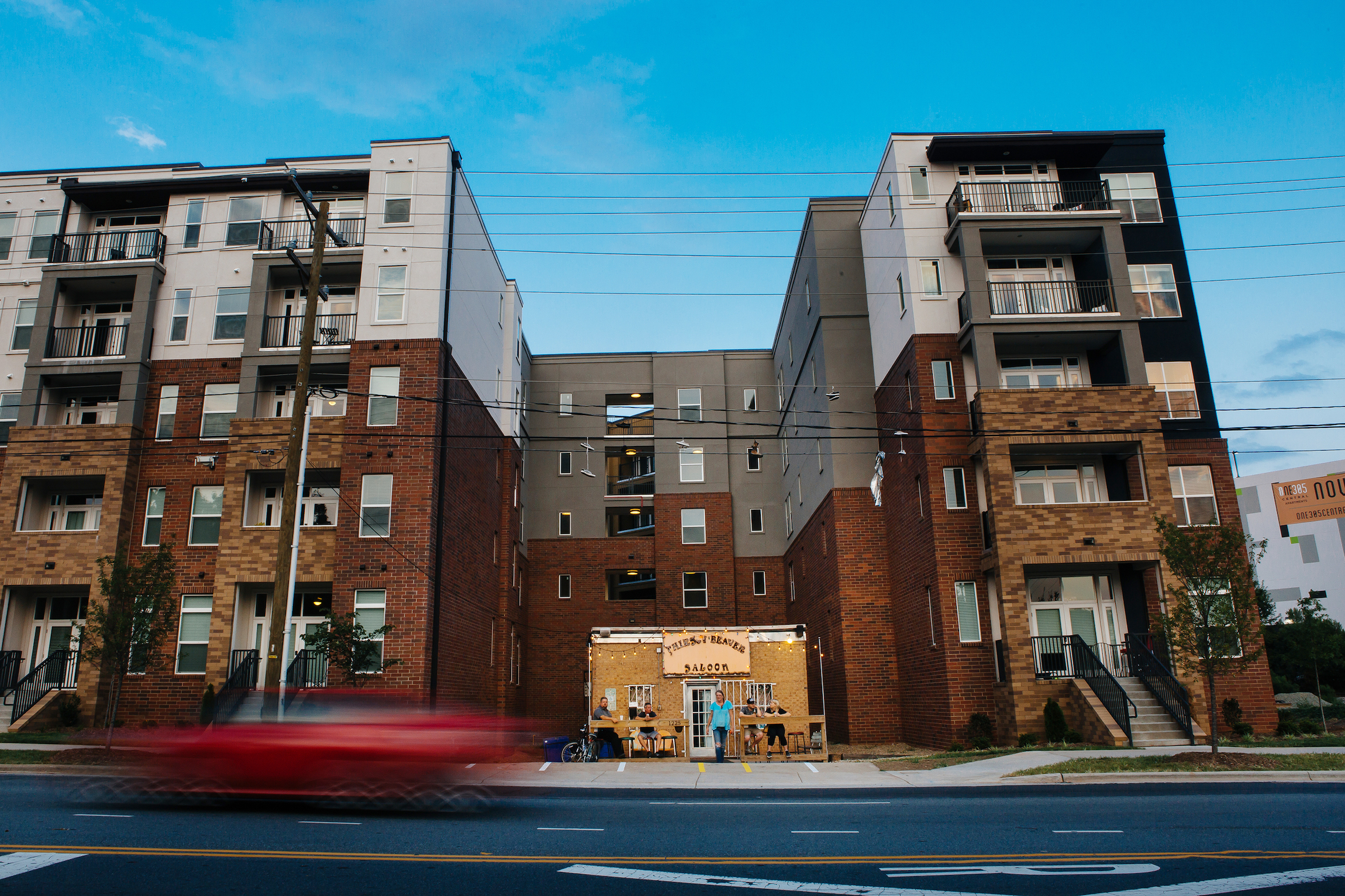 The story of that second photo begins in 2008, when Brian and Mark opened the Thirsty Beaver, leasing the space from the Salem family of Charlotte, which has owned the property since 1953. The brothers had one edict for their honky-tonk: It had to be the kind of place they’d want to hang out. “The idea was that Mark would bartend one day, and I’d sit and drink,” Wilson says. “And I’d bartend the next day, and he’d sit and drink.”

At the time, Charlotte’s Plaza Midwood neighborhood consisted of a mishmash of strip malls, pharmacies, drive-thrus, and mostly modest middle-class homes. But soon after, Plaza Midwood started to become a hot new piece of property for the circling real estate moguls, established and aspiring alike.

Around that time, a local businessman named John Hatcher purchased every plot of land surrounding the Thirsty Beaver, intent on developing a massive apartment structure.

Hatcher tried to persuade the Salem family to sell him that final plot, but the family steadfastly refused. With little recourse, Hatcher flipped the land to area developers who began building his apartment complex around the Thirsty Beaver. Soon, what used to be a tiny brick building buttressed by loose-gravel lots and sunbleached asphalt parking lots became surrounded by a five-story apartment structure, built in a U-shape to make room for the little dive bar that held out.

Like Jagger’s, a photo of the bar dwarfed by the new construction made its rounds on the Internet, as it further echoed the untempered growth of not only Charlotte, but of so many cities and towns in the contemporary South. It’s in these two images that Wilson most clearly sees the spirit of his and his brother’s little “clubhouse,” as he sometimes calls it: The first, a monument to the city Charlotte is becoming, rising high above a place where a family of barflies was born. The second, a photo of rock and roll’s most genre-defining character, enjoying a cheap beer outside of a dive bar not far from the 70,000-seat stadium he’d hold in the palms of his hands in just a few short hours.

“Those two pictures have helped create this thing that I think everyone wants to or can be,” Wilson says. “You’re an individual, you can’t be pushed around, and then you get this approval from somebody. But maybe it’s your parents. Maybe it’s society that says, ‘Hey, you’re okay.’ For us, it’s Mick.”