Shining a Light on an Artistic New Orleans Cottage When Julie Neill first bought her double shotgun house on a pretty Garden District street in New Orleans, it offered a built-in solution for any parent with two teenagers to raise. The front door on the left side could serve as the kids’ entrance, with the door on the right reserved for grown-ups. As the children progressed through high school, she had a few years to consider how she’d renovate the 2,800-square-foot duplex—which at the time had six tiny bedrooms and a wall separating the halves—and make it into the home she wanted. Most essential to Neill’s plan: honoring the 1880 structure’s impeccably preserved bones, including the four handsome Victorian brackets supporting the roof over the front veranda and the original plaster walls throughout. As a designer of custom lighting fixtures, she was particularly drawn to the voluptuous ceiling medallions in most rooms; she wouldn’t find any finer frames for her creations, which vary in size and style, from grand crystal chandeliers made with vintage gunmetal to pared-down solid white
plaster sconces. Neill in her sitting room.

Neill also knew that even though the children were no longer revolving in and out of the left door, she wanted to keep the feature, so she instead rejiggered the interior. Enter on the right side today and you’ll walk through a living room and a dining room into a large, well-appointed kitchen that spans both sides of the house. A narrow staircase leads up to the guest suite in the partial second floor that New Orleanians refer to as a “camelback.” And if you enter on the left? 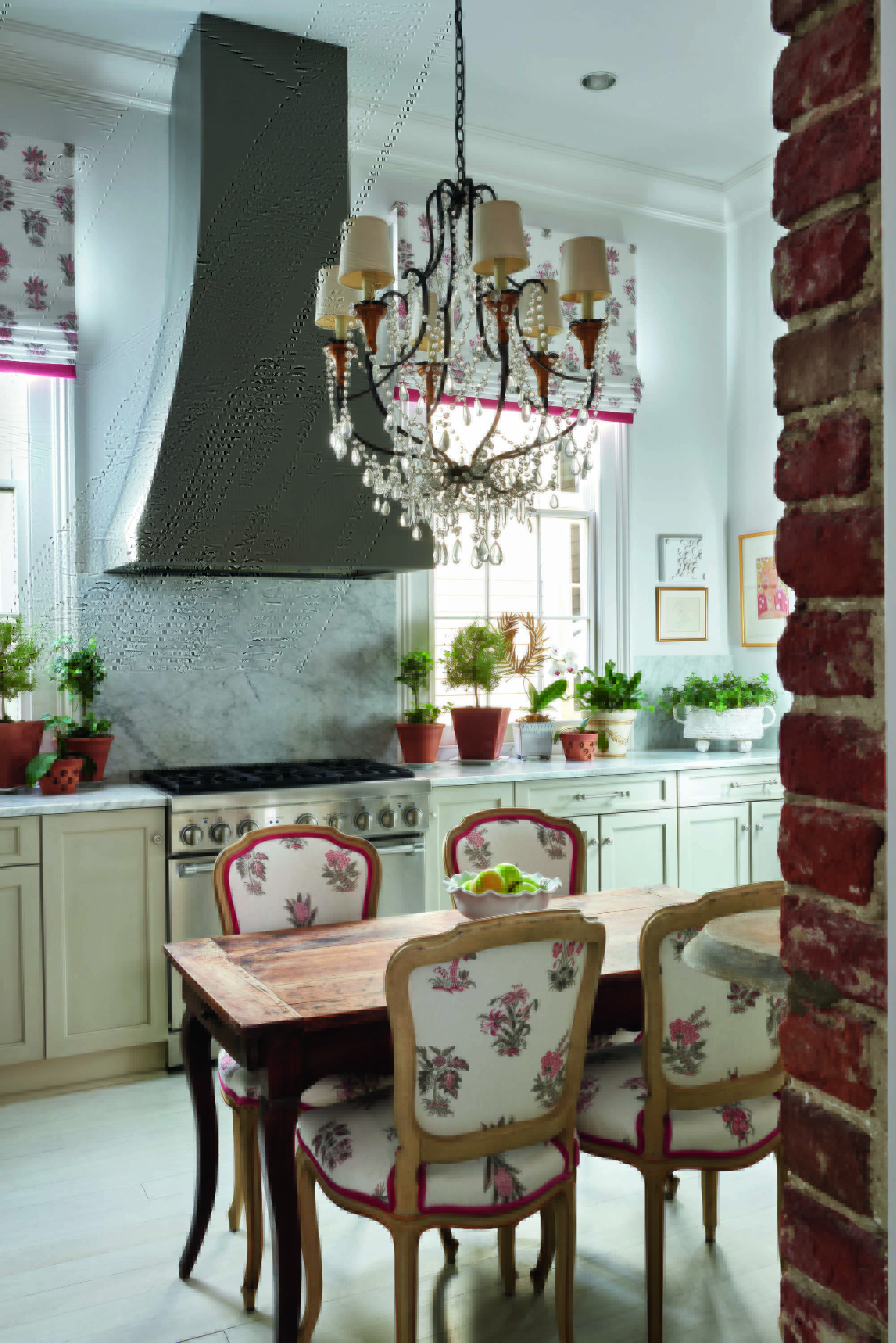 “That’s what I call my contemplation spot,” she says of the two rooms on that side, one behind the other in true shotgun fashion. The doors communicate with the dining room, but once shut they seal off that half of the house, turning it into a de facto study—or rather, Neill’s creative factory. She begins all of her designs there, sitting at the worktable with a sketch pad and taking inspiration from her surroundings—in her home, as in her work, antique and modern, rough and refined, old and new, all blend with ease. Take the painted floors throughout the house, which make perfect sense juxtaposed against the historic cypress doors, stripped of every century of color and stain to highlight the raw grain and patina in the original wood. That graceful marriage is aided by the white on white on white decor, including some collages Neill made from the pages of old books. In addition to offering a respite from the New Orleans heat, “the white just rests my eyes,” she says. “It’s such an invitation for me to have pieces in my house that make an impression that won’t be complicated by anything going on behind them.” Most often those pieces are her own lighting fixtures, career-spanning designs whose striking shapes and materials stand out from the gallery-like backdrop. And usually she scouts out antique materials, such as gilded brass pressed banding, to create them. Yet one of her most original pieces, a feathery spool above her bed that looks like an archangel’s tuffet, came from an unlikely source. “I probably shouldn’t tell this story,” she says, pausing just long enough to make you think she won’t. “But I was out driving and saw two big lampshades that had been put out for garbage. So I took them home and glued feathers to them.” The back dining room, with a framed paper collage that Neill created. The light fixture she designed was inspired by tree branches and Spanish moss.

Her house is a little like those lights. She saw promise and reinvention where others might not have. “When I bought the house, it was beautiful to me in its history,” she says. “It’s important to give new life to things because they hold all the good energy of the past. For me, the experience of living in a house that was built in 1880 is enriched by knowing that my house has been a wonderful home to so many who have lived there before me.”

>VIEW A HOME WITH CHARLESTON HISTORY