At Home with Charleston History

A young family updates a house with deep Lowcountry roots The exterior of the Philip Johnston Porcher House.

An enchanting painting hangs in a quiet corner of Zoë and Brys Stephens’s Charleston, South Carolina, sitting room, depicting the library of Zoë’s childhood home, the circa-1772 William Gibbes House, with its brimming bookshelves and French wallpaper awash in afternoon light. The scene provides both a glimpse into the past and a powerful reminder of Zoë’s generational perspective on life in an old Charleston home. “We are all only stewards of these houses for a short period,” she says, “and time is so much bigger than any one of us. These houses will be here long after we are gone.” 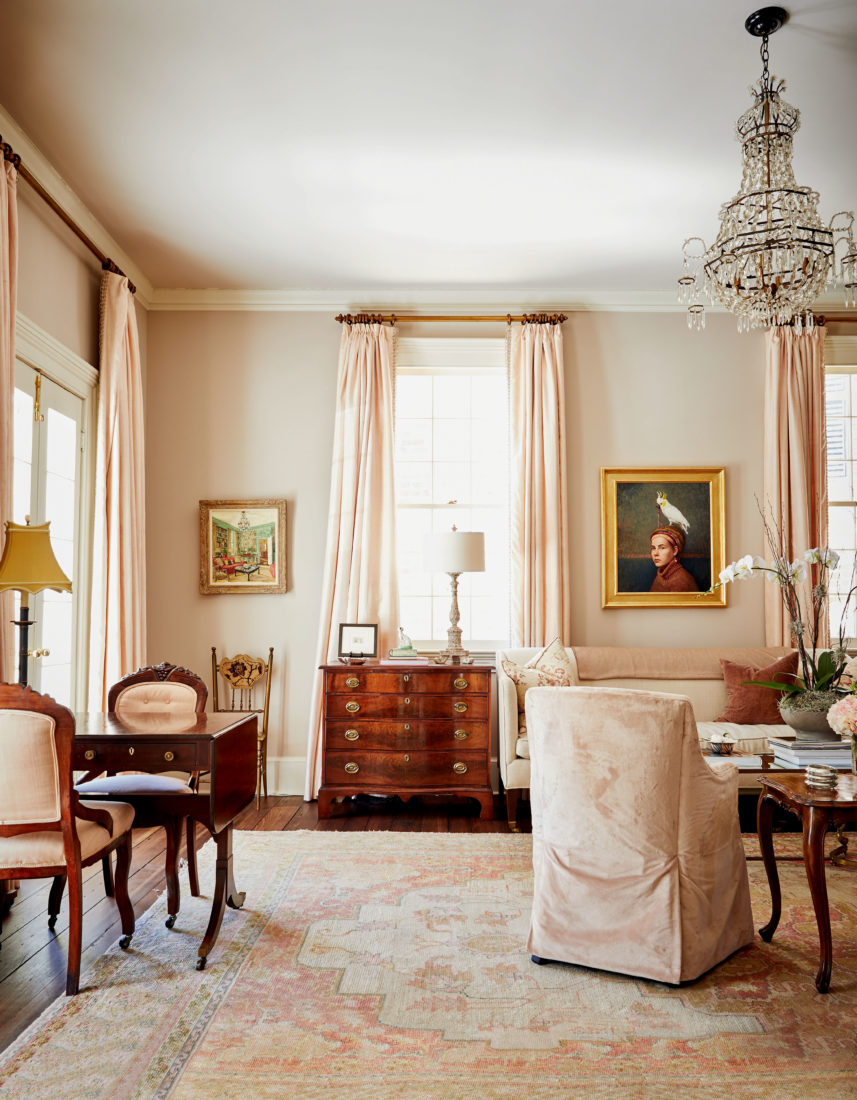 Interior designer Amelia Handegan worked with the Stephens family to select the distinctive wall color in the sitting room. The painting at left, by Theodore Colebrook, features the library of the William Gibbes House, the Charleston home in which Zoë Stephens grew up.

Zoë, who had two daughters, and Brys married in 2015, and when the time came to find a home, they ended up just a few doors down at the Philip Johnston Porcher House on South Battery. Porcher and his wife, Louisa, built the circa-1835 abode just west of White Point Garden. After Benjamin Adger Hagood purchased it in 1914, the Hagood family sold it to the Stephenses some 101 years later. Technically called a Charleston double (two rooms wide instead of the ubiquitous one), the home was constructed of native black cypress, with double piazzas facing south. Now a house lies opposite, but when the first generation of Porchers lived there, the piazzas overlooked nothing but a wide expanse of marsh and the Ashley River. One of several porches.

Zoë and Brys, excited by the prospect of updating the Porcher house to make it more livable for a young family, began renovations immediately. “As seems true of every house project,” Zoë says, “ours burgeoned into a much larger one than we ever anticipated.” It took a year to complete. The couple changed their minds along the way; one room intended for Brys’s office became a nursery when they learned they were expecting a son. “It’s a luxury to draw from such a rich history,” Brys says. “We were striving to discover what had been done before and to restore it.” The couple worked with the Charleston architect Glenn Keyes to simplify the space, removing later additions and rerouting the central stair. “Brys is a total detail freak,” Zoë says with a laugh. “He would be awake in the middle of the night thinking about the floors. He would say, ‘I think we have to take the risk and pull them up!’” His obsession paid off: The original heart pine floors awaited them under layers of subfloor. For decorative details, the couple turned to a family friend, the Charleston interior designer Amelia Handegan, who is known for her talent at turning formal historic homes into stylish, lively family spaces. “I worked with Zoë’s mother for many years,” says Handegan. “What Zoë was around in the past is now informing her own decorating.” Handegan advised Zoë as she navigated myriad interior choices, from the chandelier in the dining room to the antique painting of Mercury in the library, and she pointed the couple toward what would become one of Zoë’s favorite finishes in the house: the delicate blush lavender in the sitting room, which reads differently as the light changes—pale purple at night and brownish pink during the day.

The Stephenses, though, masterminded the kitchen on their own. They both love cooking, so the layout emphasizes function, and the range is a workhorse rather than a showpiece. But they left perhaps the most charming part of the room as is: the fireplace. “Having a fireplace in the kitchen is such a gift,” Zoë says. “You can’t manufacture that feeling. It made us think of reading, pulling up a chair, and browsing through a cookbook, so we had bookshelves constructed right next to it.” 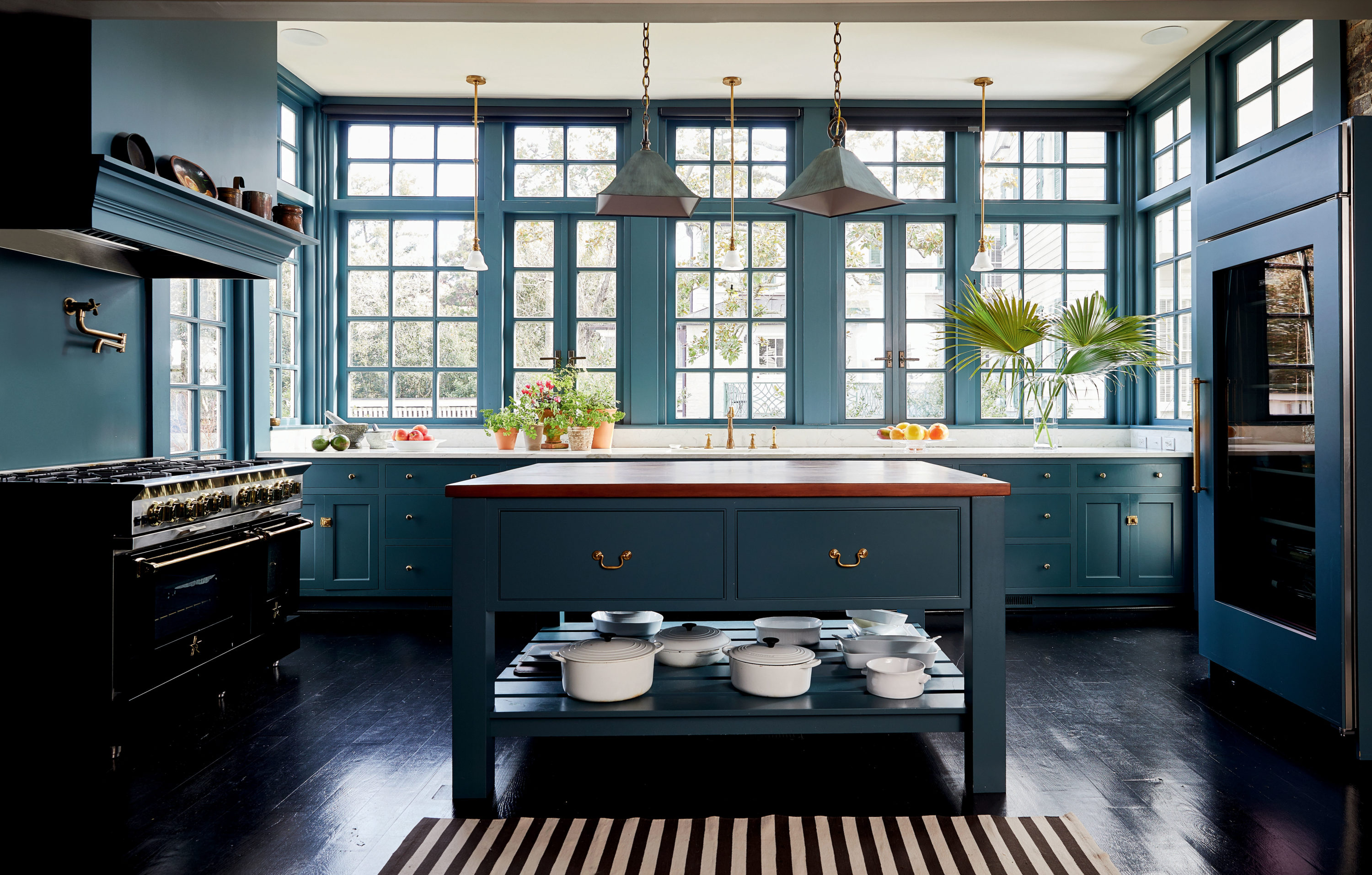 The Stephenses chose a dark hue for their kitchen, which in the daytime gets flooded with light; the casement windows overlook a garden designed by Sheila Wertimer.

The island, made from wood reclaimed from the bottom of the Edisto River, anchors the space with help from pendant lights handcrafted in town by the artisans at Urban Electric Co. The colors of the deep-green cabinets and trim, and the black painted floors, were choices more practical than aesthetic.

“We get a lot of eastern light in the kitchen,” Zoë says. “In the summer it’s almost blinding. We knew we didn’t want a light, reflective color. And this house seemed to beg for something that would work as a backdrop for the historic architecture and the time period when it was built.” In modern times, the room is the hub of the house. The children often taste-test and help cook, whether the menu includes pork chops with grilled okra or batches of biscuits. 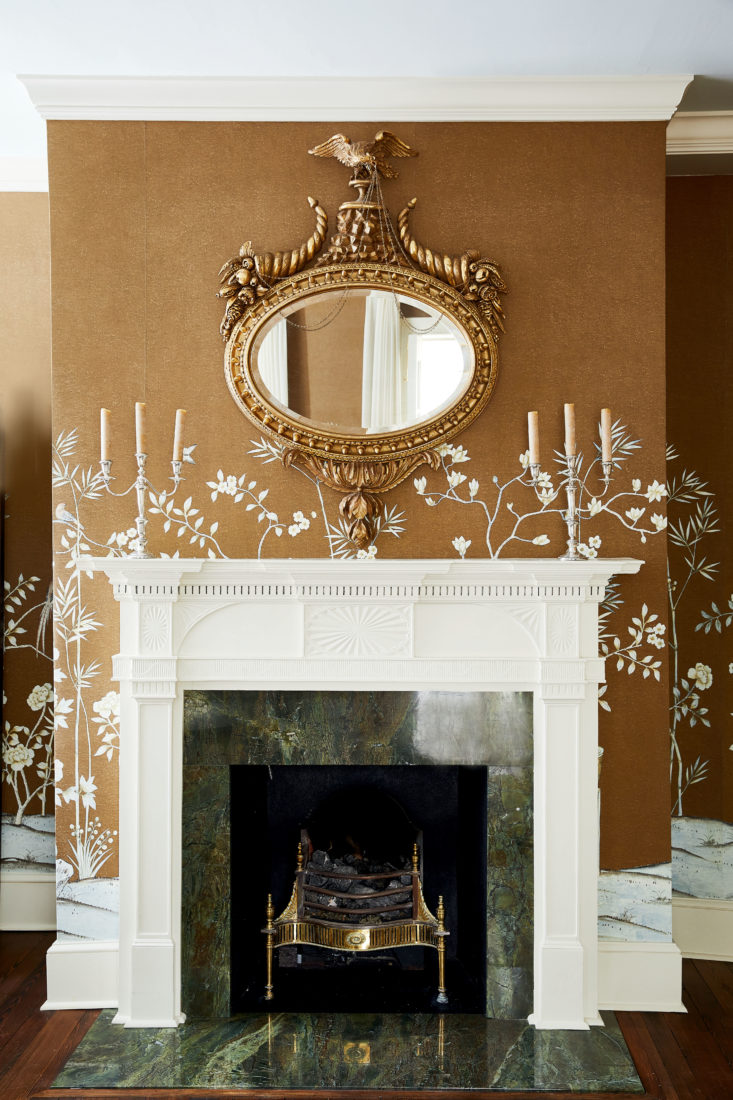 The dining room wallpaper resembles that which hung in Zoë’s childhood home.

Perhaps it’s fitting, then, that Zoë’s favorite item she mingled in from her childhood home is the antique dining room table, the site of so many celebrations and memories (including the time one of the legs splintered at a dinner party, and the festivities continued after a few books were used to prop it back up). Another piece of history, forming a bridge for a new generation. he couple in the kitchen, with their cookbook collection and their Australian labradoodle, Griffon.

“You enjoy such an emotional tie to the house you grow up in,” she says. “The smell, the creaking floors, the feeling when you walk in the door. I want my children to grow up with a deep sense of connection, and I can’t think of any place better than here.”

To pull off the revamp of his family’s Wilson Lake getaway, the designer rolled up his sleeves and got to work on a made-to-measure retreat

The Art of the Sleeping Porch

Wind down with flair in this nostalgic summertime haven