The best of Britain’s historic field culture, in and around its storied capital 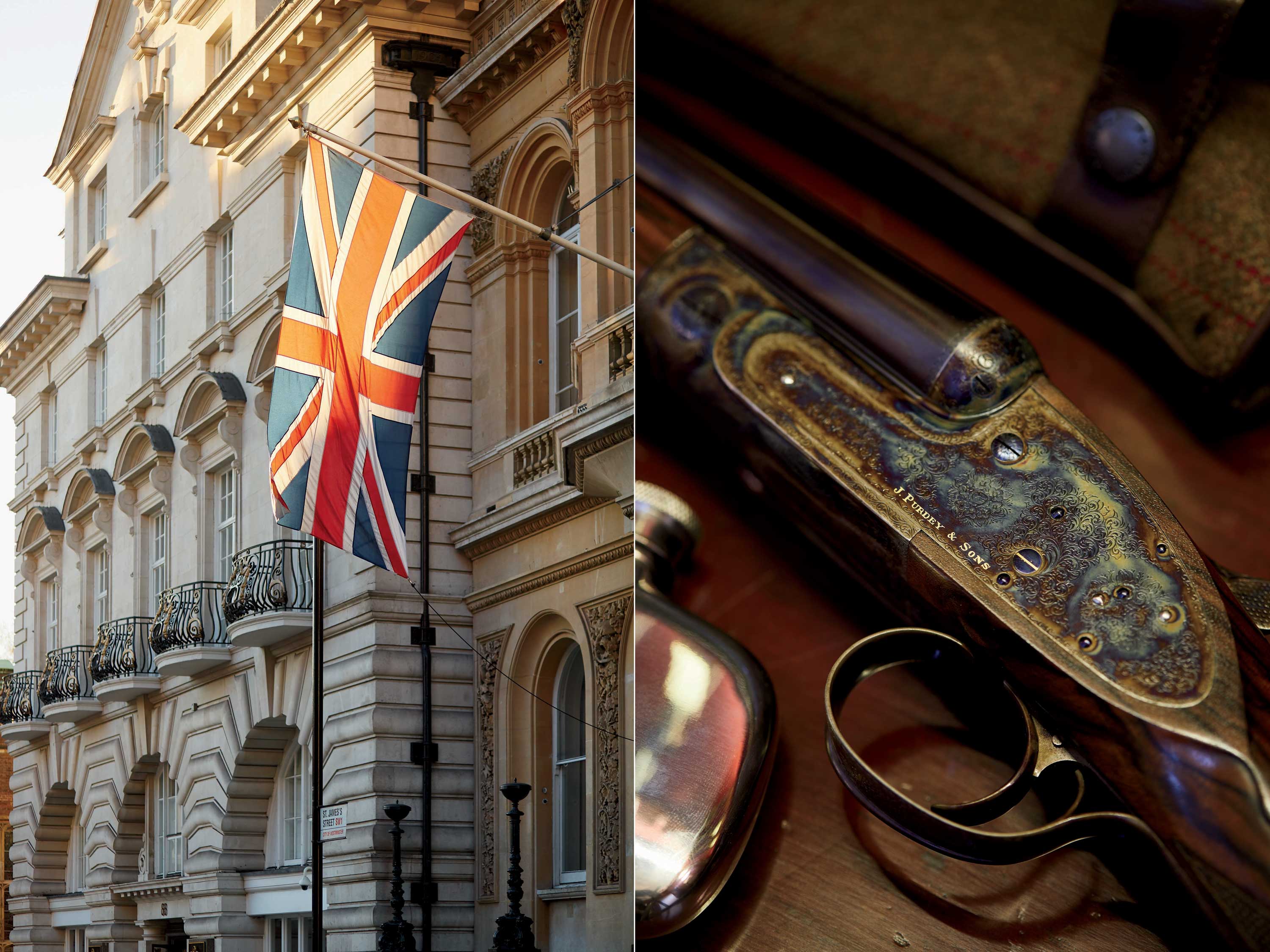 If you rode or shot or fished in early-twentieth-century Britain, as gentlemen did at the British Empire’s height, you came to the West End of London for your kit: guns, tackle, saddles, boots, clothing. All were fashioned by hand, almost all made to your measurements, and invariably the best money could buy.

A century-plus on, far fewer shops in London cater to what the British call fieldsports, but those that do rank among the world’s most prestigious. Bespoke remains big, but even if something isn’t made-to-order, old-fashioned craftsmanship is paramount. A shop’s advanced age—a defined sense of history—earns it virtue, as does holding royal warrants. The latter are granted to firms or tradesmen that have supplied goods or services to the Queen, the Prince of Wales, or the Duke of Edinburgh for at least five consecutive years. Some might dismiss warrants as merely stoking snob appeal, but the royals ardently support Britain’s craft trades, so to possess one demonstrates a company committed to upholding tradition.

There have been changes for the better, too. Fieldsports are no longer reserved only for fusty old colonels; shooting, in particular, is booming among British women. The gunmaker Holland & Holland launched one of the first women’s shooting clubs, in the 1990s, and ladies-only clubs have since spread throughout the United Kingdom. But now, as ever, London remains the gateway to Britain’s sporting traditions—from fine guns to wild-game dinners. And you don’t need a title to enjoy them.

Find yourself on a driven shoot with a team of Brits and you’ll see many using Italian over-and-unders, and those made by the world’s oldest gunmaker usually dominate. Beretta’s London gun room is the city’s largest, displaying nearly all of the brand’s handsome shotguns, which range from a few thousand dollars to more than $100,000. You’ll also find rifles by Tikka and Sako, German optics, and clothing and accessories with Italian flair.  beretta.london

Owned by Chanel since 1989, Holland & Holland recently made over its Bruton Street showroom and has embraced contemporary fashion with country character (shooting vests, field jackets, and jumpers designed by the model Stella Tennant and Lady Isabella Cawdor). But at its core, the 183-year-old gunmaker remains just that—renowned for its rifles and “Royal” model sidelocks, made by skilled craftsmen in its factory in North West London. Should you want to try one out, H&H also operates a popular shooting ground in nearby Northwood hollandandholland.com Gunmaker to kings, or the king of British gunmakers? Maybe both. With three royal warrants, Purdey helped set the standard for top-quality London gunmaking for more than two centuries, most famously since the 1880s with the introduction of its proprietary side-by-side “self opener,” a gun that springs open when you push the top lever over. Its Audley House showroom—built in lavish Queen Anne style in the late nineteenth century—remains as regal as ever.  purdey.com

A gritty workshop just south of the Thames is home to London’s only gunmaking firm of note owned by a bench-trained working craftsman. Michael Louca and his team of six build handsome sidelock over-and-unders, side-by-sides, and other sporting guns in-house per his own designs. He also stocks an excellent used-gun selection from a variety of makers. Visits are by appointment only.  watsonbrosgunmakers.com

Ensconced in the ritzy St. James’s district, William Evans is one of London’s last independent gunmakers—and its most affordable. The shop’s manager, Alastair Phillips, is friendly and knowledgeable, and his intimately sized gun room is one of the best in London in which to buy a well-vetted pre-owned shotgun at a fair price. Its selection of outdoor clothing, for men and women, is extensive, including such Scandinavian brands as Seeland and Härkila for those suffering from tweed fatigue. williamevans.com

Eric Clapton liked Cordings so much he bought in to the company in 2003, injecting energy into a brand famed since the mid-1800s for making waterproof outerwear for men. Clapton added a range for women, and today Cordings is a go-to for ladies and gents seeking an English country look with city style (but without Savile Row price tags). For the money, Cordings’s tattersall shirts are the steal of the city. cordings.co.uk A peek at Cordings’s inventory for women.

This Savile Row tailor has long dressed Britain’s nobles and notables in bespoke suits and formal wear, but it is also revered for its ultratraditional custom tweed shooting suits. The suits were a favorite of the late Simon Clode, the discerning director of the Birmingham-based gunmaker Westley Richards & Co., and thanks to a partnership with D&G master tailor David Cook, you can now find more affordable, off-the-shelf versions at the Westley Richards shop in Birmingham, just over an hour and a half from the city by train. denmangoddard.co.uk; westleyrichards.com One of Denman & Goddard’s senior tailors hard at work.

Housed in imperial grandeur on Pall Mall, Farlows remains a mecca for fly fishermen 178 years after opening its doors. It stocks all your basic gear—waders, rods, flies, and bamboo nets—but also more obscure tackle such as Japanese-style tenkara rods. It has lure fishermen covered, too. Dog-training supplies, fieldsport accoutrements, and a generous line of shooting clothing round out the 6,500-square-foot shop’s extensive inventory. The folks at Farlows can also arrange fly-fishing lessons and getaway excursions for trout, grayling, and saltwater bass. farlows.co.uk Much is made nowadays about heritage brands, but few possess as much longevity as Lock & Co. The world’s oldest hat shop (1676), it’s housed in a small seventeenth-century building on St. James’s Street that literally creaks with British history as you enter. Lock & Co. fitted the crown for Queen Elizabeth II’s coronation, but for those of us more humbly born, its courteous staff can help select a flat cap or a beanie.
lockhatters.co.uk The hatboxes at Lock & Co. are almost as lovely as the toppers themselves.

British craftsmanship at its most opulent reigns at William Asprey’s boutique depart-ment store on Bruton Street. Asprey, a seventh-generation scion of the famous jewelry family, set up shop on his own in 1999 and has since become a leader in preserving, promoting, and selling the best of Britain’s craft trades. Silver or gold, watches or leather, clothing or bespoke shotguns—William & Son carries it. williamandson.com

Once the old barreling room of the Whitbread Brewery, this gastropub is celebrated for its wild game, some of it shot by the chefs and owners. The menu evolves as seasons change. August brings its eponymous jugged hare—slow braised in a jug and topped with a sauce made with its own blood, a preparation that dates to the 1700s. In autumn comes the Poacher’s Perk, a whole Yorkshire snipe baked inside a potato. thejuggedhare.com

Brett Graham is an avid deer stalker. He also happens to be one of Britain’s best chefs; his Notting Hill restaurant claims two Michelin stars. Venison, not surprisingly, features prominently, such as Graham’s roe deer baked in Douglas fir with smoked bone marrow and beetroot. Or try his flame-grilled mackerel with smoked eel, Celtic mustard, and shiso. Make reservations early for this destination restaurant—months early. theledbury.com The grouse at Rules.

Close to Buckingham Palace in London’s West End, the newly remodeled hotel has a warrant from the Queen, a Michelin star for its restaurant, and proper footmen in red tails. Kate Middleton stayed the night before she became the Duchess of Cambridge. But for all its royal connections, the hotel remains understated and elegant in a very English way. For afternoon tea, you can’t do better than the Goring’s Bar & Lounge, which also mixes an impeccable gin and
tonic. Hunters take note: The hotel can easily store licensed firearms during your stay. thegoring.com Plenty of shoots take place near London, but none more magnificent than at the five-thousand-acre West Wycombe Park, about twenty miles from Heathrow. Home of Sir Edward Dashwood and anchored by a grand eighteenth-century Palladian mansion, the estate is surrounded by hills and vales that provide outstanding driven partridge and pheasant days from September through February. It’s also home to the gunmaker E.J. Churchill and its expansive shooting grounds. For booking, the British-born, South
Carolina–based shooting instructor Chris Batha is the U.S. agent—start planning more than six months out. westwycombeestate.co.uk; chrisbatha.com

The most famous of the United Kingdom’s chalk streams—the name for the wide, shallow waterways that flow through southern England’s chalk hills toward the sea—the River Test is where in the 1880s F. M. Halford codified techniques still used in dry-fly fishing today. The chalk-filtered, crystalline water, rich in aquatic life—including finicky brown trout and grayling—courses gently through verdant meadows. You can book picturesque private beats through Henry Mountain at Roxtons, one of Britain’s blue-chip sporting agencies. Stockbridge, a village sixty-five miles southwest of London on the banks of the Test, offers tearooms, pubs, and hotels for overnight stays. roxtons.com Casting for trout on the River Test.

If you’ve never shot into a pack of red grouse hurtling toward you at seventy miles an hour or tackled a pheasant curling over at forty yards plus, you’ll need a lesson (or three) on how to do it. Only twelve miles outside the West End, the West London Shooting School has been teaching shooters since 1901, most famously with an elegant, effective style modeled after the technique of Percy Stanbury, the school’s late chief instructor. Simulated grouse butts, a bevy of high towers, and top-notch teachers will help you wield a British Best shotgun with the aplomb it deserves. shootingschool.co.uk