On New Year’s Day, millions of people will dutifully eat some amount of black-eyed peas with the hope that it will lead to prosperity throughout 2021. This superstition has its strongest hold on people with some connection to the South, whether by birth, bloodlines, or current residency. For people who don’t fall into one of those categories, and even for many who do, the tradition is a bit of a head-scratcher. I know that I’m supposed to do it, but I’m not sure why. I’m here to provide answers, and those answers come from a layered culinary and cultural mashup of West Africa and Western Europe. Let’s break this culinary tradition down into its key ingredients.

Why on the First Day of January?

First of all, we can thank the Romans, specifically Julius Caesar, that our calendar begins in January. The Roman annual calendar used to begin in March, in honor of Mars, the god of war. Doing what dictators do, Caesar switched things up in 46 B.C.E and started the year in January. Not everyone was on board at first, and many European countries operated with different calendars until Pope Gregory XIII modified the Julian calendar in 1582.

Europeans fully embraced the idea that doing something, or having something happen, on the first day of the year would have year-long consequences. For our purposes, the most relevant example is Scotland’s “first footer,” or “first foot,” tradition. The Scots believed that on New Year’s Day, you’ll have good luck all year long if the first visitor you get, i.e. the “first foot” in your home, is a dark-haired or dark-complexioned man. Change anything up, like the hair color or the gender, and that’s bad luck, y’all. Sometimes that visitor brought gifts to enhance the prospect of prosperity in the new year, which could include food. Scots, one of the largest white ethnic immigrant groups to British North America, brought the first foot superstition with them to the South.

Black-eyed peas, which despite the name are actually a type of bean, are native to West Africa, and they are common in cuisines throughout the region. They belong to a broader category of beans called “cowpeas” in West Africa and “field peas” in the South. Before European contact, West Africans didn’t have an analogous New Year’s Day food tradition, but as with many cultures around the world, they celebrated auspicious days with symbolic food or by preparing a traditional meal. In many West African religious traditions, deities had human attributes. They had their favorite foods, and black-eyed peas were frequently on the short list for special occasions. Even today, black-eyed pea dishes are served on such occasions as the birth of a child (especially twins), a homecoming, or a funeral. In addition, West Africans have long considered black-eyed peas as a good luck charm that warded off the Evil Eye.

People of European heritage could relate to this as well. They carried around amulets of things with “eyes,” like a buckeye, for the same purpose. Additionally, even though beans had a low-class reputation, they were viewed more favorably on auspicious days because they swell while being cooked. This increase in size symbolized good luck because presumably one’s fortunes would increase. Another piece to the puzzle is that black-eyed peas are quite prolific, so they could be seen as a fertility symbol. Another way that people, um, increase.

Coming to the South

Under far more horrific circumstance than the Scots, enslaved West Africans brought their food traditions and beliefs to the American South. Slave ships departing West Africa were provisioned with black-eyed peas to sustain the captives during the Middle Passage across the Atlantic Ocean to the Americas. The enslaved grew black-eyed peas in their plantation gardens. By the mid-1700s, both the enslaved and slaveholders were eating black-eyed peas on a regular basis. Thomas Jefferson grew them in his Monticello garden.

No one knows for sure exactly when this happened, but the various ingredients blended to create a new New Year’s Day tradition in Southern kitchens. Perhaps enslaved African American cooks in plantation kitchens came up with the idea of substituting the dark “eyes” of the black-eyed peas for the first footer visitor after hearing about the tradition. European slaveholders, including those of English and Irish heritage, may have had the same idea after noticing how the enslaved held field peas in high esteem. Another possibility is that Sephardic Jews who came to the South, especially those with a connection to Syria, inspired others to copy their custom of eating black-eyed peas for good luck on Rosh Hashanah, their New Year’s Day. In any case, a new and enduring tradition was born.

Over time, this New Year’s Day tradition has taken on various forms. In the Carolinas, particularly in the areas strongly influenced by Geechee and Gullah culture, rice is cooked along with black-eyed peas or red field peas so that the lucky dish becomes hoppin’ John. Some families place a dime in the pot of black-eyed peas to symbolize the dish bringing prosperity through coins. Receiving the dime in your serving gives an extra boost of good luck. This troubles me for two reasons. First, there’s a serious risk of choking on that dime. Second, after two centuries, shouldn’t the celebrants have adjusted for inflation? A dollar coin, or a quarter at the very least? Many celebrants have also added dark leafy greens to the plate as a symbol for dollar bills or “folding money.”

So now you know the recipe for an enduring tradition: Take one part European superstition, one part West African culinary memory, one part cultural exchange, combine in the antebellum South, and let simmer for a couple of centuries. While I grew up in Denver, Colorado, my Southern-born parents served black-eyed peas every New Year’s Day. I must admit that, over the years, the promise of prosperity has been occasionally fulfilled. Yet I still endeavor to eat those lucky beans every year. For some reason, they always taste like hope.

Below is one of the first recipes that I got from my late mother, Johnetta Miller. Though this is a recipe for black-eyed peas, this is my standard approach for making any vegetable in “soul food style.” If you want to give this recipe a hoppin’ John feel, make some rice separately, mix together, and eat. 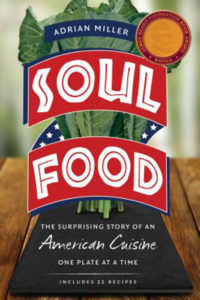 Adrian Miller is the James Beard Award–winning author of the book Soul Food: The Surprising Story of an American Cuisine, One Plate at a Time. His next book, Black Smoke: African Americans and the United States of Barbecue, will be published in April 2021. Curing your own wild-hog ham is a lesson in patience, with a stunning reward