Corn to Be Wild in Virginia 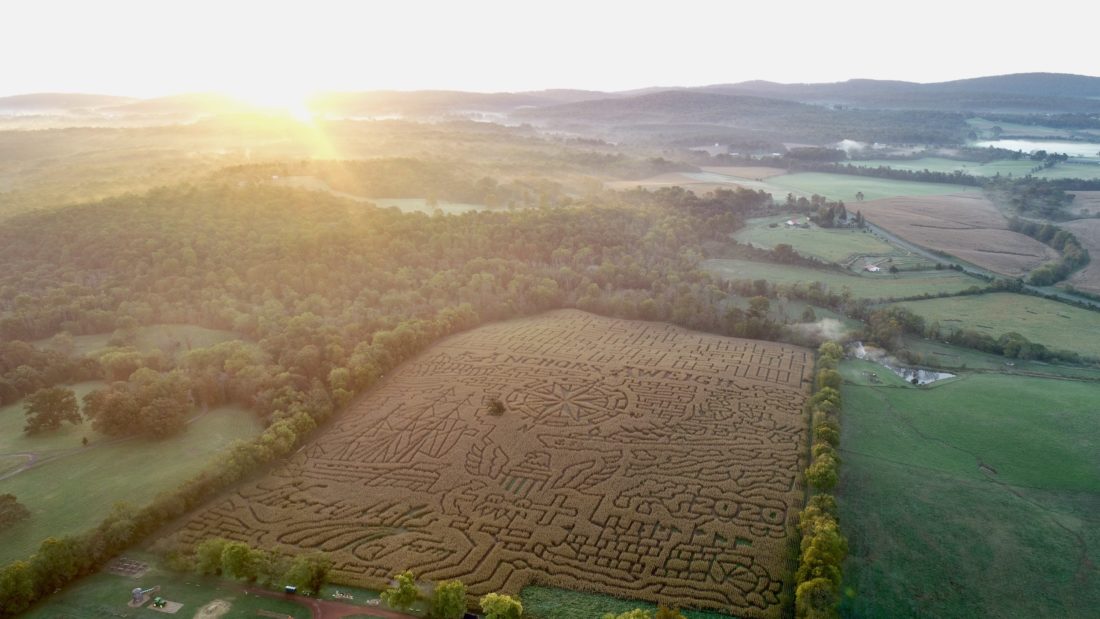 “I was a mechanical engineer for twenty-five years. Now I help people create memories.” That’s how Kent Woods, the owner of Somerset, Virginia’s Liberty Mills Farm, describes his job, and on a crisp October day with dozens of families navigating his thirty-four-acre corn maze, Woods has pretty much nailed the description. With the Blue Ridge Mountains in the distance, leaves turning a burnt sienna hue, and the corn maze itself the definition of amber waves of grain, the scene feels like a Norman Rockwell painting (with face masks).

This year, Woods calculates his is the biggest corn maze in the country, surpassing the Richardson Corn Maze in Illinois, California’s Cool Patch, and Colorado’s Anderson Farm, which are all around thirty acres. Laughter echoes from inside the rows of stalks as children run through Woods’s engineered playground. Adults are here, too. It’s clear this is no ordinary farm and Woods is no ordinary farmer.

Each year for the past eleven, Woods hand draws, hand sows, and hand shapes a different labyrinth vision into corn. “We always try to find a patriotic theme, if possible,” Woods says. This year, Woods salutes the Navy with an intricate armada. Visitors will skip through the USS Constitution, meet dead-ends amidst the Mayflower, trace the BB-63 Missouri, and spin in circles attempting to exit a paddle steam ship included in honor of Woods’s great-grandfather, a riverboat pilot.

Woods divided his maze into four levels with twelve miles of trails, from elementary to expert. The expert “mystery maze” is an eight-acre, three-and-a-half-mile trail that requires a minimum two-hour commitment to navigate. It has drawn maze enthusiasts from around the world. Some lost souls have even called the farmer from their cell phones from inside the stalky puzzle—a-mazed, corn-fused, and needing assistance to get out. (Woods assures potential guests there are plenty of staff on hand to help in a pickle.)

Each year, the maze theme starts with a kernel of a concept. “First of all, we take a look at potential anniversaries. For example, last year was the fiftieth anniversary of Apollo 11,” says Woods, a native Iowan who moved to Orange County with his wife and children in 2010. Sounds easy enough: Shape some corn into a rocket and voila! A space maze. Not so for the audacious farmer. Rather than trace a piddly spaceship, Woods concocted an entire NASA galaxy complete with the obligatory rocket, an astronaut, the words “One Small Step” in huge letters, and the Apollo lunar module. In 2011, he made a reproduction of Mount Rushmore; in 2014, an ode to Francis Scott Key’s famous Star Spangled banner complete with a depiction of Fort McHenry; in 2010, a celebration of freedom with a Statue of Liberty, traced across the field six times the height of the real thing.

Each summer, Woods and his team plant corn in a giant, acres-wide grid pattern. In late July, they begin transferring designs, using X and Y coordinates, hundreds of little flags, and grass killer. This is an entirely tractor-free process. You can’t get, say, details in an eagle’s feathers with a tractor. “It’s just not practical to do that,” Woods says. Next, Woods flies a drone above the fields to check his work. “Yes, I have had to go back and replant because I took out something I wasn’t supposed to, and that is done with a little stick and a bucket of corn.”

Around the rest of his farm, toddlers haul pumpkins from the neighboring eight-acre patch before their parents palm bags of kettle corn and cups of cider. The ultimate Americana autumnal attraction proves that in the time of social distancing, getting lost is good business—last weekend saw more than three thousand visitors, and Woods says his staff served thirty gallons of pumpkin ice cream and thirty pounds of fudge. Visitors might find Woods cruising his Gator utility vehicle around the property, greeting guests and reveling in their excitement at his creation. “You know, I’m sixty-five and my mom asked me if I’m looking to retire,” Woods says. Not a chance. “I’m enjoying myself. This is fun.”