Unicorn grits at Millers All Day in Charleston, South Carolina.

Grits are ripe for gimmicks. The ubiquitously Southern food has been a vehicle for fish, shrimp, cheese, garlic, and sugar, as well as the inspiration for half-serious grits sandwiches and grits pies. But a new iteration takes grits into the mythical realm. Meet “Unicorn Grits,” as dubbed by Greg Johnsman of Geechie Boy Mill at Millers All Day, the newly opened perpetual-brunch restaurant in Charleston, South Carolina, that he co-owns with chef Nathan Thurston. Geechie Boy Mill, located on Edisto Island, is known for its small-batch Jimmy Red Cornmeal and grits that Johnsman speckles with bran for surprising pops of color. But these pink grits are another thing entirely. There is no dye, no crunchy bran, and no other added ingredients—the pink color is part of the “Unicorn” corn itself.

“When you mill most red corns, the red is only in the bran layer,” Johnsman says. “When I first milled this corn, I literally shouted, ‘Oh crap! It’s pink!’ The color is completely throughout the whole kernel.” 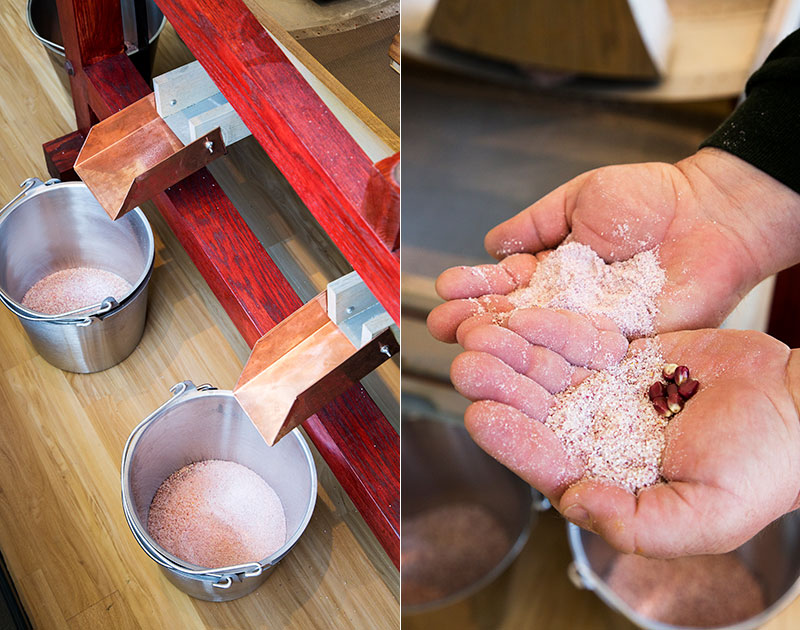 From left: Pink grits and cornmeal filter out of the separator; Johnsman holds the red corn and pink grits.

A rogue gene causes a red kernel to randomly—and rarely—appear on ears of yellow corn. One Appalachian farmer who provides corn to Johnsman grew and selected for the red kernels over and over for nearly a decade until he had enough to plant a stand. Johnsman ordered as much as he could. When he ground it, he realized he had the makings for a perfect draw for the Holy City, where on any given weekend you can find tourists, college-kid parents, bachelorette parties, and food bloggers, all eager to learn about—and joyfully Instagram—the next big thing in Southern food. He thinks this batch will last him through the year.

In the restaurant’s front window, Johnsman installed a refurbished corn separator—the oldest one in the world, according to his own research—that clanks and whirrs, grinding the reddish corn kernels into coarse pink grits and cornmeal. From there, he bags the goods for retail in the restaurant and provides executive chef Madison Tessener with as much rosy material as she can come up with ways to use it. Johnsman with the refurbished corn separator that sits in the window at Millers All Day.

“The pink grits have a bigger grain but are softer than other grits,” she says. “I soak them in water overnight, cook them in their soaking liquid, and sometimes add a little lemon to help them retain their pink hue.”

In the short time the restaurant has been open, she’s used the Unicorns as the base of a collards-and-brisket grit bowl, in the crust of a lemon icebox pie, and in a sweet-savory cookie. “Blue corn is very floral, Jimmy Red is nutty, but Unicorn is sweet and soft,” Johnsman says, adding with a chuckle, “Now you know, if you were wondering, that the inside of a unicorn is soft.”

Bags of the pink cornmeal and grits are available to purchase in the storefront, and the Millers All Day team is working on a mail-order option so eaters all over the world can get a rare taste of a myth brought to life.