Tim Line, the former manager and part owner of the Smokies’ remote LeConte Lodge, looks back over four decades on the mountain Not much has changed at LeConte Lodge—perched near the summit of Mount LeConte, the third-highest peak in the Great Smoky Mountains National Park—since Tennessee mountaineer Jack Huff began building the rustic retreat in 1926. There’s still no electricity and no running water, and the only way to reach the secluded lodge is to hike in. But the 2018 season marks the first time in just over forty years that Tim Line won’t be at the helm of the beloved high-country camp. He officially retired at the beginning of March, the start of the 2018 season; longtime Lodge employee John Northrup is filling Line’s boots. “He really loves the mountain,” Line says. “I feel better about leaving knowing that.” To mark the changing of the guard, we sat down with Line to reflect on his forty-plus years on Mount LeConte. How did you start working at LeConte Lodge?

I actually applied to work on the crew when I got out of college in 1975, but they had already hired everyone for the season. Instead, I went and hiked the Appalachian Trail. Then in 1977, I joined the crew. My wife, Lisa, started working up there in 1978. We met and hit it off. Got married in ’79 and neither of us left. We were making just fourteen dollars a day, but we couldn’t believe we were getting paid to work up there.

You became the site manager in the early ’80s and along the way, you and your wife had three children. Did you raise them up on the mountain?

Mason, our son, was born in 1983. We brought him up to LeConte when he was just fifteen days old. He did great. He didn’t know any different. And then two years later, Grace came along. We raised those two up on the mountain until they were five and seven. Lisa home-schooled them. They learned all the wildflower names and how to scare off bears. But eventually they were ready to go to school with other kids, so Lisa stayed home with them down in the valley. Our third child, Jacob, was born in 1993. He just got out of college, and he is working on the LeConte crew this year.

What does an average day at LeConte look like?

We serve breakfast at 8 a.m. to guests. The crew comes in at 7:30 a.m. to prep. The manager on duty cooks. There’s no electricity and no running water, so all the dishes are washed by hand. After breakfast, most guests pack up and leave. There’s a whole morning routine that involves cleaning cabins, filling kerosene lamps, cleaning the bathrooms, etc. There’s a lot of maintenance that needs to be done. Then the new guests start arriving mid-afternoon. We do the same breakfast routine at dinner. I was on the mountain part of the time but not all of the time once the kids and Lisa moved into the valley. But when I was off the mountain, I was typically running around buying stuff for the lodge. 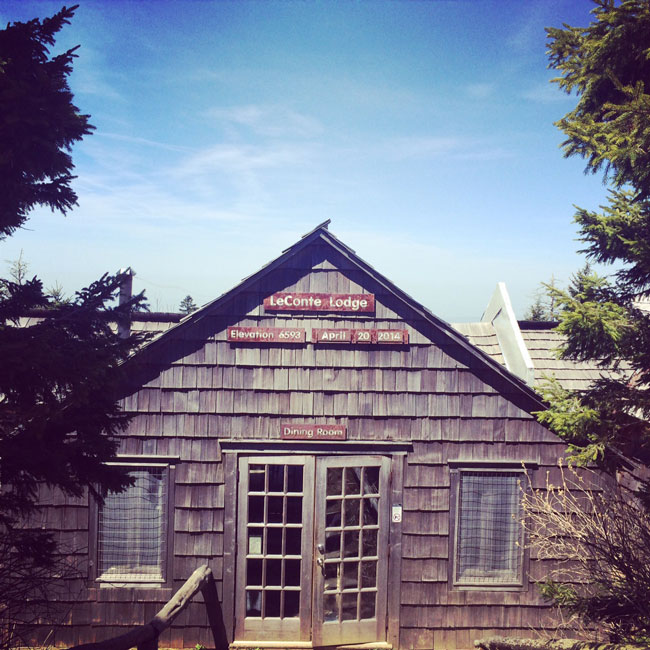 LeConte Lodge is the highest lodge east of the Mississippi, and there’s a 3,000-foot elevation gain. How do you get all those supplies up the mountain?

Once a year we have an airlift. We contract a helicopter outfit out of Michigan. We have a staging area inside the park where we get all of our supplies together. Fuel, kerosene, canned goods, merchandise. Then we airlift it up to LeConte. It’s about 35,000 pounds of stuff in all. Once we open for the season, our llamas bring up all the perishable foods like the eggs and bacon, as well as the laundry on Mondays, Wednesdays, and Fridays.

We started using llamas in 1984. Up until that point, we were using pack horses to haul supplies. They came up the Rainbow Falls trail and that trail was getting severely damaged. The horses weigh about 1,200 pounds each. The Park Service asked us to come up with an alternate method. We had heard of llamas being used out west. Initially, we bought three llamas to try them out and quickly realized we would need a lot more. We now have a llama farm out near Gatlinburg with twenty-four animals. They have padded feet sort of like a deer, so they do less damage than a hoof or even a hiking boot.

There are five trails leading up to the lodge. What’s your favorite?

The shortest and most popular is the Alum Cave Trail—it’s around five miles long. But it’s also steepest and most scenic. Probably 80 percent of day-hikers and lodge guests come up it. I’m pretty partial to Alum Cave, too. That’s also the one the crew uses. But all five are beautiful and have something different to offer.

What did you love most about working at LeConte?

I really enjoy the lifestyle. It is a very different lifestyle. Sometimes people think it sounds glamorous or romantic, living on the third-highest peak in the park, but it’s a lot of work. I also enjoy meeting all the people who make their way up the mountain. We get such a wide variety of people at the lodge. Over the season, we have 12,000 guests or so. In addition to that, we get 15,000 day-hikers who come up and have lunch. And no day is the same. The weather is different every day. The seasons change. There are snow events and rain events. Everything seems to be magnified up there. But it’s a great commute to work. I’d rather hike on a trail for two hours than drive to work any day. The dining room at LeConte Lodge.

The lodge books up almost as soon as you release reservations each year in October. What do you think it is about LeConte Lodge that captures the imaginations of so many people?

There’s no other place like it—no other overnight lodging in the entire park besides the campgrounds. At LeConte, you can enjoy the backcountry without having to carry all the gear you would need for camping. All you have to bring is extra clothes and rain gear. All the cabins have propane heaters and kerosene lamps and linens and wool blankets on the beds. You can rough it without really having to rough it. And at about 6,600 feet, the views are spectacular. You have a grandstand view of the park. On one end of the mountain, you can watch the sunrise, and on the other, you can watch the sunset. The lodge hasn’t changed much over the years. We try to keep it basically the same. I think that is what appeals to a lot of people.

Is there a particular season that you recommend visiting during?

Depends on what you’re looking for. Most popular time is fall. Everyone wants to come for the fall color. Those reservations go the fastest. The summer months go pretty quickly, too, because kids are out of school and families can come together. Other people like to come up for the spring wildflowers. Still others like to come really early or really late to try and catch a snow. Any time is nice because the mountain is always different. But I think winter is especially beautiful. Everything is closed and quiet. My wife and I spent a few winters up there early on. That’s a really special time. Colorful blooms outside the lodge.

Any big snowstorms while you were up there?

We’ve had a couple over the years. One of the most memorable was in 1987, and it happened just after we opened for the season. It snowed a base of four feet. Drifts were up to the roofs on some of the cabins. We only had seventeen overnight guests on that Thursday, but they were stuck there until the following Tuesday. After a couple days, though, those seventeen guests really weren’t guests. We put shovels in their hands and they started working. We could only walk where we shoveled. It was five or six days later before people finally started coming back up the Rainbow Falls trail. This was well before cell phones, so we had trouble getting word out and contacting the families and work places of the stranded guests. All we had was a two-way radio.

LeConte is about as backcountry as you can get. Any run-ins with the wildlife?

There are plenty of bears in the park. Most come and go, but every once in a while we get bears that will stick around. Back in the day, we had one bear that would come every year. Her name was Sheba. She would break into cabins and steal food. She learned to break in when she heard the dinner bell because everyone would leave their cabins and go to the dining room. Three different years, the Park Service moved her, and every year she still came back. Bears are very instinctual.

What will you miss most about life at LeConte now that you are retired?

Probably being able to live and work inside a national park. That is a real privilege—to have the whole park as your backyard. That experience is something I would never take for granted. 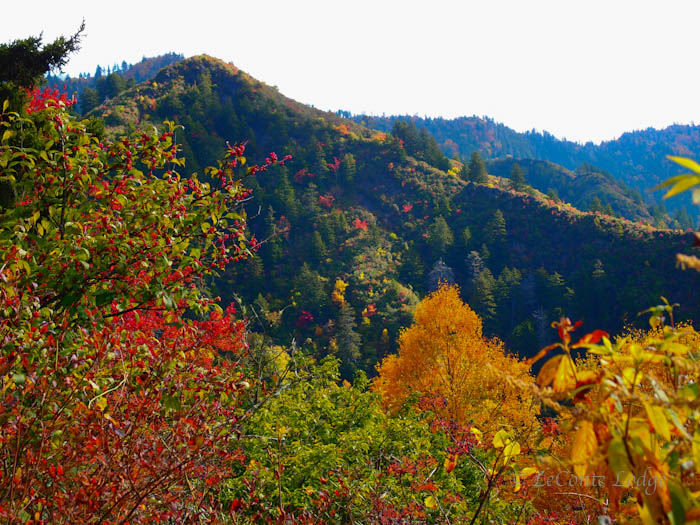