Top Hats for the Kentucky Derby There is perhaps no Southern sartorial event more famous—or ogled—than the Kentucky Derby, particularly the annual parade of hats worn by spectators. To honor that tradition, Garden & Gun works with milliners each year on designs that will stand out in the crowd. Last year, Florida native Gigi Burris debuted a straw confection. This year, South Carolina textile artist and milliner Leigh Magar designed not one, but four Derby toppers—two fedora styles for men and two sunhat options for women. Magar handcrafts the hats from natural panama straw and embellishes each one with ribbons, silk floss, and feathers dyed with hyper-Southern ingredients, from Lowcountry loquats to black walnuts gathered in Mont Clare, South Carolina. “Loquats and black walnuts produced a gorgeous champagne gold hue,” says Magar, who brews the dyes in her John’s Island studio for her home goods line, Madame Magar. Beyond materials, the hats share the same traits, according to Magar. “They are both traditional and modern and can be worn to the Derby or worn casually. Women also love the fedoras. I don’t believe in hat rules, I just believe in wearing what you love.” How to Bet the Kentucky Derby

Secrets to betting on the greatest horse race of them all 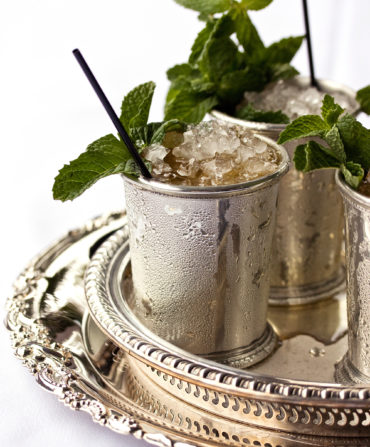 Two vintage recipes from the 1930s When in bourbon country, these four bars and restaurants will do you—and your mint julep—proud