From Roanoke to the Nantahala National Forest, here’s an expert’s guide to unforgettable fall vistas 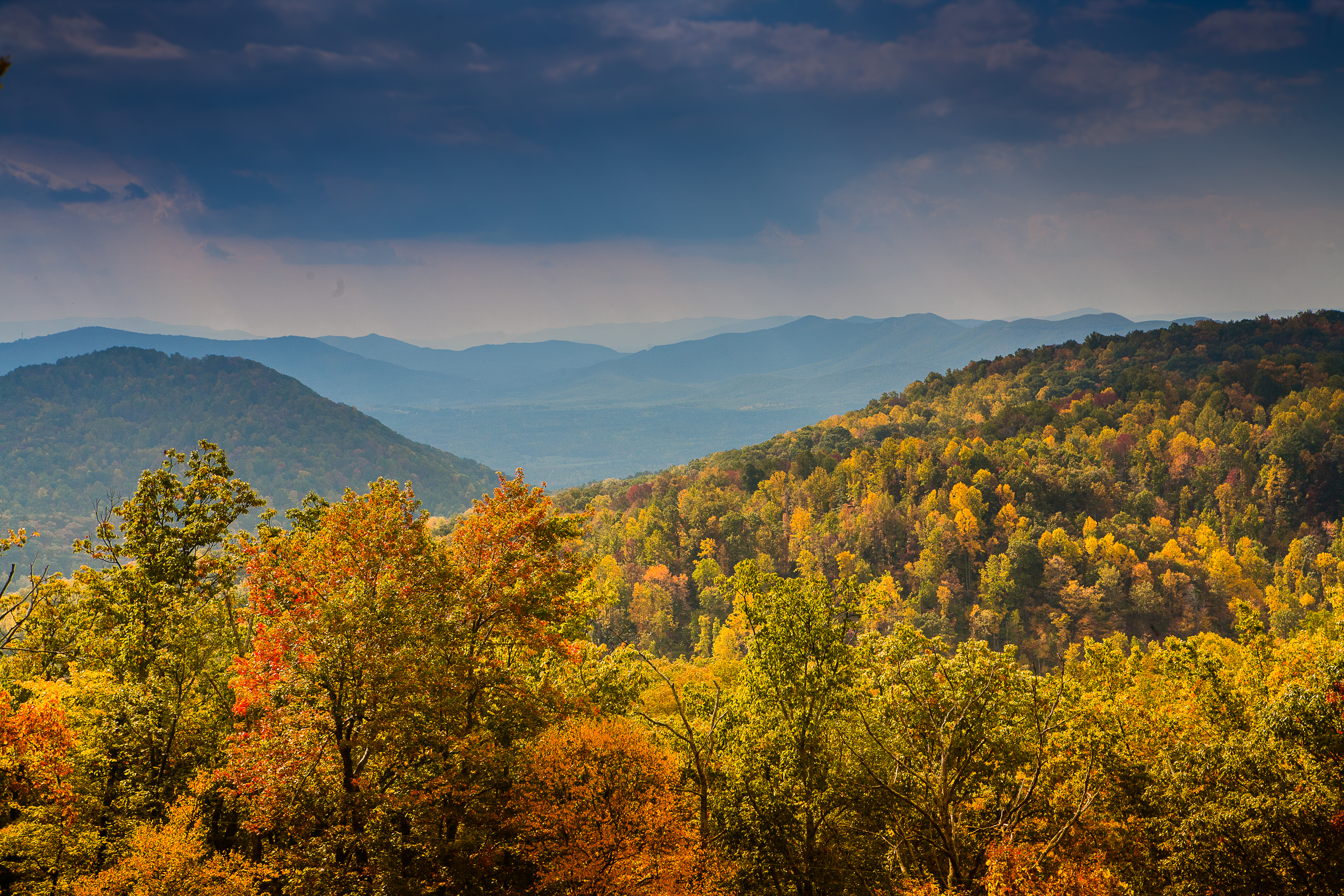 Already one of the most scenic roads in America, the Blue Ridge Parkway becomes a cherished Southern spectacle come October. While the crisp air coaxes vibrant reds and yellows from the leaves of hickory and dogwood, visitors flock to the mountains to see the show, and this year’s performance is set to be extra flashy. Favorable weather conditions have made the current fall foliage outlook much more promising than 2018’s, which means a leaf-peeping trip is a must. To make the most of what the parkway has to offer, Howard S. Neufeld, a professor of biology at Appalachian State University, better known as the “Fall Color Guy,” shares his favorite spots along the way.

Milepost 176
This pitstop is one of the most photographed sites on the Blue Ridge Parkway, and for good reason. The early 1900s wooden gristmill sits beside a stream as though suspended in time. A century after its construction, you’ll still find the waterwheel spinning and millers grinding flour. In October, the trees surrounding the mill turn a rusty orange and make for a delightful photo op. Before continuing on the parkway, stop for an authentic country breakfast at the Mabry Mill Restaurant and fill up on sweet potato pancakes with all the fixin’s. The changing leaves act as a colorful backdrop for Mabry Mill in the fall.

Doughton Park
Milepost 241.1
This somewhat out-of-the-way park is one of Neufeld’s personal favorites. Turn right at the country store after entering the recreation area, and the road will dead end at a parking lot. About a hundred feet away, you’ll find an overlook where you can peer down into a deep valley of brilliant colors in the fall. Nestled among the reds and yellows, try to spot a rustic log cabin that used to be a family’s home into the 1920s. “You can get an idea of how rough life was for some people who lived there,” Neufeld says.

Cascade Falls
Milepost 271.9
Hikers need only walk one mile to find this thunderous waterfall tucked inside E.B. Jeffress Park. Here, all the main tree species can be found along the path, which leads to a dazzling palette of fall hues framing the twenty-foot cascade. An upper and a lower overlook offer different perspectives of the falls and informational plaques identify the variety of flora beside the trail.

Rough Ridge
Milepost 302.8
Just past Blowing Rock, North Carolina, this one-and-a-half-mile trail is aptly named, so prepare for some jagged terrain and crowds during peak leaf-peeping season. Neufeld suggests checking this one off the list early in the day or later in the evening to have the scenery all to yourself. At the summit of this trail lies a rocky outcropping and a prime spot for capturing heart-stopping photos. It’s not uncommon to spot adventurous trekkers sitting on the edge of the “Lion King rock,” dangling their feet 4,700 feet above the ground like they’re lounging by the pool. 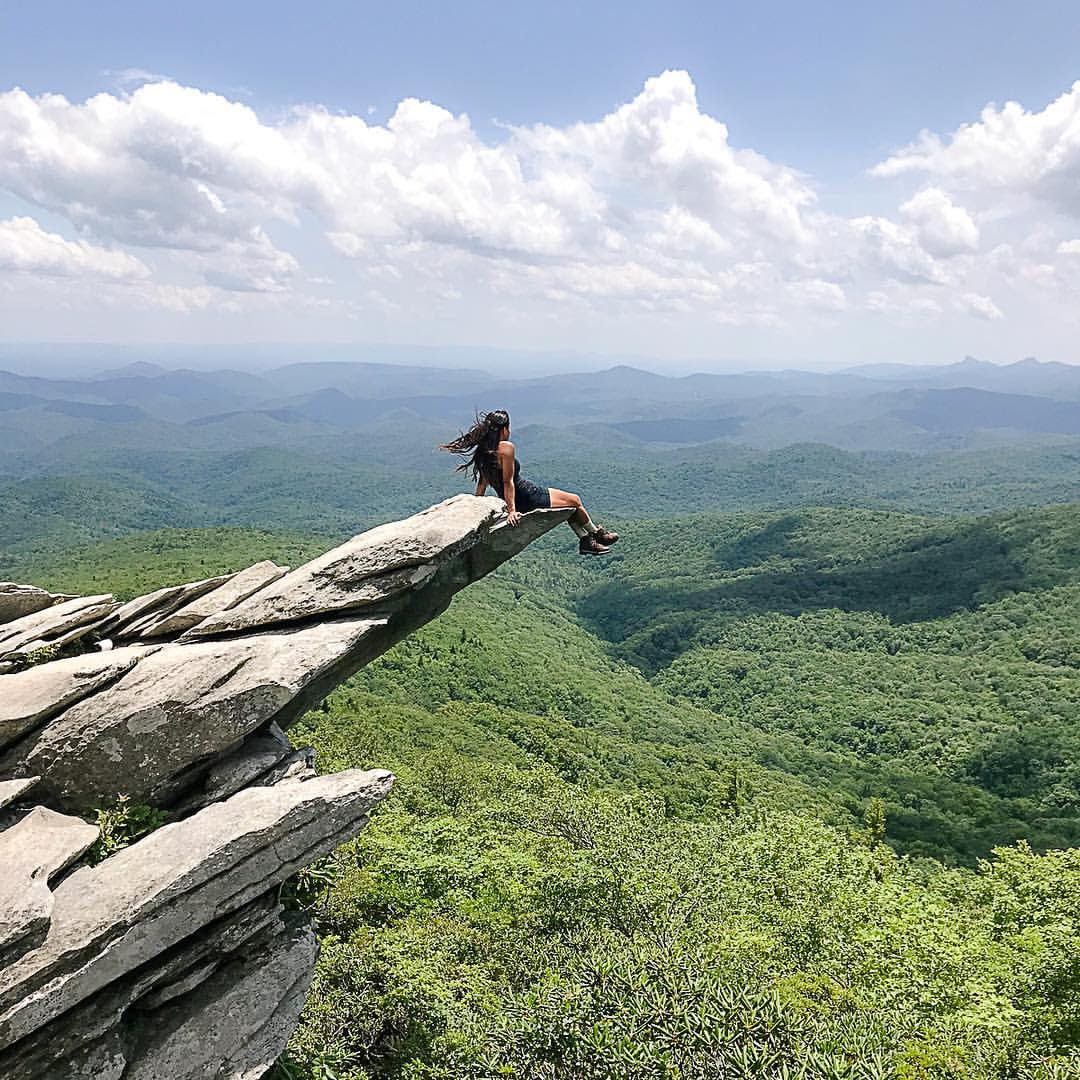 A hiker sits on the edge of the “Lion King rock” at Rough Ridge.

Beacon Heights
Milepost 305.2
A quick jaunt down the road, Beacon Heights will appeal to the milder of heart, but that doesn’t mean the views are any less jaw-dropping. Pack a picnic for this trail and spend some time on the smooth rock face that blankets the summit, soaking in the mountain ranges to the east. The trail is only about one mile round-trip, so Neufeld suggests this spot for those who aren’t looking for a lengthy trek through the woods. A glimpse of Grandfather Mountain from the Beacon Heights parking lot.

Flat Rock
Milepost 308.3
Similar to Beacon Heights in ease and length, Flat Rock is its west-facing cousin. Peer over the edge of the rocky outcropping for an expansive view of the Linville Valley, or look up to see the peak of Grandfather Mountain rise above the neighboring ridges. Despite its name, the top isn’t entirely flat. Wind and rain have carved shallow basins into the rock, which scatter the summit like craters on the moon. A view of the sunset from the Flat Rock overlook.

Chestoa  View Overlook
Milepost 320.8
One of the easiest overlooks to miss along the Blue Ridge Parkway also happens to be the one with the most stunning view. You won’t need a protein bar for this stop, just a keen eye to spot the small sign that marks the entrance of Chestoa View Overlook. A short stroll to a stone observation deck atop a cliff unveils a spectacular panorama of the Linville Gorge. You can even see Grandfather and Table Rock Mountains in the distance.

Mount Mitchell
Milepost 355.4
At 6,684 feet, this mountain rises higher than any other in the Appalachians. On a cloudless day, hikers can see up to eighty-five miles into the distance. Given the high elevation, you might want to pack an extra sweater to account for the fifteen to twenty degree drop in temperature at the top. Despite its soaring height, Mitchell doesn’t demand a lot of hiking. In fact, visitors can drive almost all the way to the peak in the comfort of their cars—all the reward, without having to rough it. 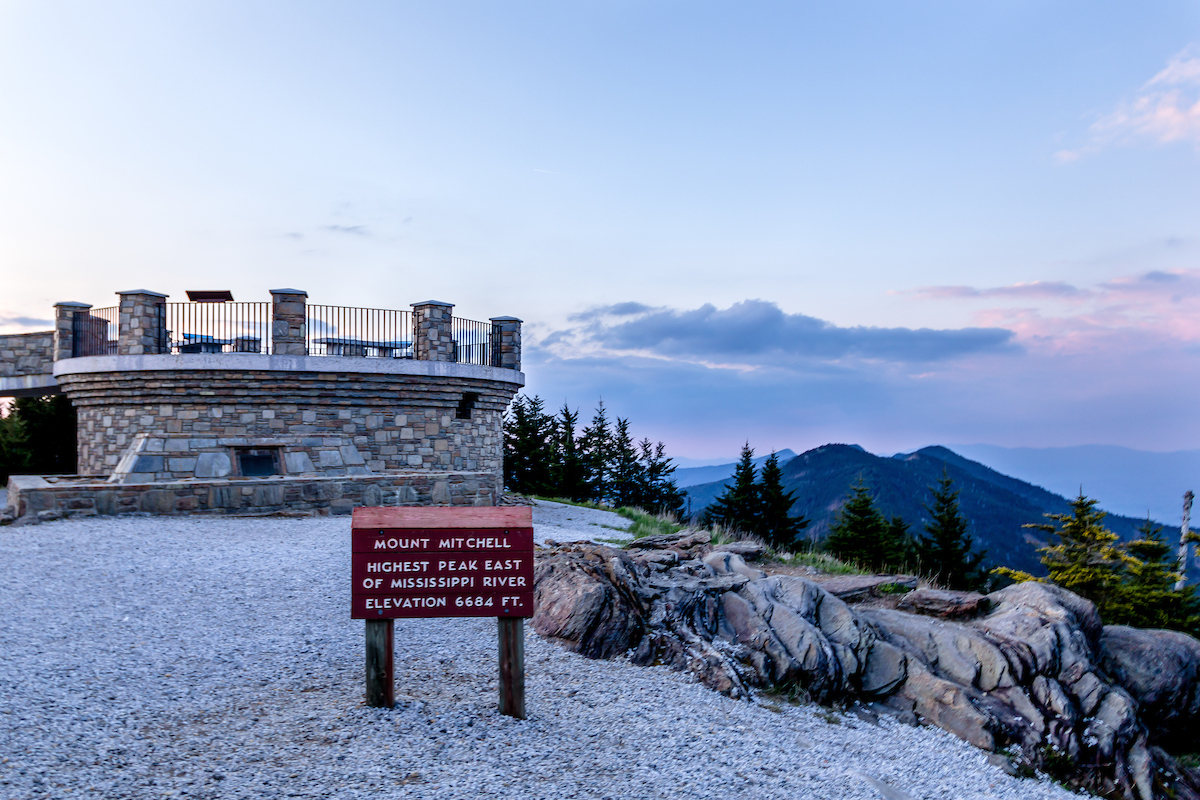 The summit of Mount Mitchell.

Craggy Pinnacle
Milepost 364.1
Much of this less-than-two-mile hike feels like you’ve stumbled into a fairy’s mythical forest. The trail, scattered with stony steps and wildflowers, gradually inclines to a summit of nearly three-thousand feet, weaving through a lush rhododendron forest. Although you won’t see any sweeping landscape scenes for most of the hike, a final set of steps opens up into a 360-degree view of the Blue Ridge Mountains. Hikers take in a colorful sunset from Craggy Pinnacle.

Waterrock Knob
Milepost 451.2
Just eighteen miles from the end of the parkway, Waterrock Knob makes for a worthy road trip finale. Even the parking lot provides a picturesque panorama of the mountains. The summit hike is short but steep, climbing 412 feet in elevation. The peak is rich in Appalachian mountain views and otherworldly sights at sunrise and sunset. “That has some of the prettiest fall color of anywhere on the parkway,” Neufeld says. If you’re willing to venture down a more rugged path, take a left at the fork just before the summit to find an eerie abandoned plane crash from 1983.

Where to see Fall Foliage on the Blue Ridge Parkway