A party starter worth celebrating “An oyster-bar tradition I didn’t know about till I started going to them on my own is that of the rooster. Let me set the stage. You and a buddy settle in at the bar for the evening. You plan to drink pitchers of beer and eat pecks upon pecks of oysters. After the second pitcher, your buddy says, ‘I’ll eat a rooster if you eat one.’ You say okay, and the two of you clink Budweiser bottles to celebrate. A server brings you a saltine topped with a steamed oyster, about a tablespoon of horseradish, and several sliced jalapeños. You shoot one back, grimace, and chase it with some beer. Your buddy does the same. Before you know it, you’ve each eaten a dozen and you’ve got a T-shirt to prove it.

This is not that. This tastes good. Instead of something you’d eat only after partying a bit, this version of the rooster is an adept way to start a party. If you don’t have fried puffy pork rinds, use saltines. But for me the pork rinds are half the point.” —Chef Vivian Howard 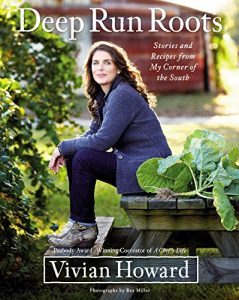 Recipe, text, and photos reprinted with permission from Deep Run Roots: Stories and Recipes From My Corner of the South © 2016, by Vivian Howard.