Can You Be Immune to Dance Fever?

Ruminating on a reluctance to boogie I am no great shakes as a dancer. Sure, I’ve been known to get out there amongst ’em, sometimes at great length, but only under three conditions:

(1) It’s with a woman. I had the chance to partner with a man in a Hollywood movie. (Check out the costume party scene in Philadelphia—I was an extra, dressed as someone’s idea of Truman Capote, which was okay, but I didn’t know how to dance with a man. I didn’t feel up to dancing with a man.) As to dancing alone, personally, I don’t see the point.

(2) And I am in love with her. Or, when I was single, the possibility was there.

Otherwise, no. I know the saying “Dance like nobody’s watching,” but I also know, from observation, that some people—and in that category I include myself, when not at least semi-romantic and tipsy—should not take that advice to heart.

High times on the dance floor, in retrospect, are a blur. But quite distinctly I remember the words of a woman in New Orleans: “Oh. You dance like my brother. Just hunching.” Or “humping,” maybe it was. Either way.

Another time, even more years ago, was in either Spanish Fort, Texas, or Dierks, Arkansas. I was reporting a story about coon hunting. When we men and dogs came in from the hunt, way after midnight, women were waiting for us in the local high-school gym, with grits, eggs, biscuits, and a band. I appreciated the food very much, and didn’t mind responding to repeated questions about what I was doing there and where I was living at the time. But then a lady came up and said, “I want to see how a man from New York dances.”

“Well of course I’m not really from—”

The band was playing a Dr. Hook song, “You Make My Pants Want to Get Up and Dance.” She drew me out there. She clearly wasn’t flirting, just curious.

She did not go on to say, “And he can dance better than this,” but maybe only because she wished to be kind.

The thing is, I don’t come from dancing people. We were Methodists, not Baptists, so I wasn’t brought up to be against it, but I do have a hard time picturing my parents, or any of their folks down in Jacksonville, Florida…

Well, maybe. Here, from Andrew Jackson, by Robert V. Remini, is a wealthy European businessman’s account of General and Mrs. Jackson kicking it at a fancy postbattle ball:

To see these two figures, the General, a long, haggard man, with limbs like a skeleton, and Madame la Generale, a short, fat dumpling, bobbing opposite each other like half-drunken Indians, to the wild melody of ‘Possum up de Gum Tree,’ and endeavoring to make a spring into the air, was very remarkable.

But no, why chime in with a snide European? I do remember a bunch of relatives singing along as George and Willy’s daughter Caroline played “Dance with a Dolly with a Hole in Her Stockin’” on piano.

And from another occasion way back then, I recollect:

Must have been Caroline. My mother called her “Carolina moon.” Pretty lips with a fetching trace of snaggletooth. Breaking into a step, just briefly, couldn’t hold it back. It sounded old, even then, but kind of wild, and at the same time nifty.

It was the Charleston. Named, nobody knows why, for the town, but deriving from Africa. A later, more fluid development was the way-cool Lindy Hop, which swing-dance couples do today, but the Charleston broke ground: Here came the Jazz Age.

Swivel, wiggle, sideways kick, arm fling, hitch, and almost gallivant. Taking off and hanging back. Stop-start, stop-start, and just flirting with a catch there, where the hyphen is, between the p and the s—in every bar a nice surprise.

Insufficiently musical words. But I do believe something about that rhythm has stayed with me, in my mind. Not in my feet, though. Too bad. 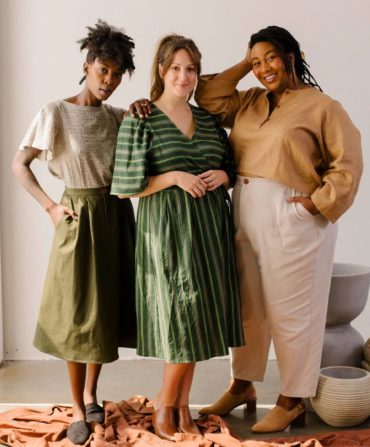