Kerry Moody’s Creole cottage in New Orleans’ Bywater district winks at passersby from a thicket of elephant-ear-shaped taro plants. Set back from the street, the house emerges from the earth like the ginger blossoms showing off their exotic coloring nearby, all yellows and greens and splashes of red. Cross through the iron gates, step along the bricked path, and you enter a sanctuary created by the man who for more than three decades served as stylist, general manager, floral design wizard, and enduring fixture at Lucullus, the city’s late and lamented culinary antique shop. An Acadian-style staircase leading to the attic rooms.

Now that the esteemed French Quarter destination has moved on from retail into Decorations Lucullus—a Bywater design studio—Moody has had more time to savor the place that has been his personal design project since he purchased the 1836 cottage twenty-seven years ago from Henri Schindler, one of New Orleans’ leading Carnival designers. Back when Moody bought the property, the structure was doused in Mardi Gras colors—purple, green, and gold. “On my first visit, the windows were nailed shut and the architectural design was not visible because it was so dark,” he recalls. When he returned, the windows were opened and he could clearly see its Creole form, a one-and-a-half-story style with a gabled roof popularized in the early 1800s by the artisans and merchants who made their home in the then-affordable neighborhood, just beyond the expanding city center. The cultural connection mattered to Moody—he descended from French-speaking Creole families. After he bought the home, Moody wielded his stylist’s eye at every turn. He repainted the house inside and out using rich Farrow & Ball shades to conjure Creole Louisiana by way of France, Africa, and the Caribbean, taking care to surprise. Window sashes in sang de boeuf nod to the Creole tradition of imitating mahogany, and define the verdigris shutters, which echo the color copper turns in tropical weather. Inside, a deep slate imbues both the staircase risers leading to Moody’s bedroom and the dining room mantel with weight and substance—Creoles often painted their wooden mantels dark colors to mimic stone or marble. 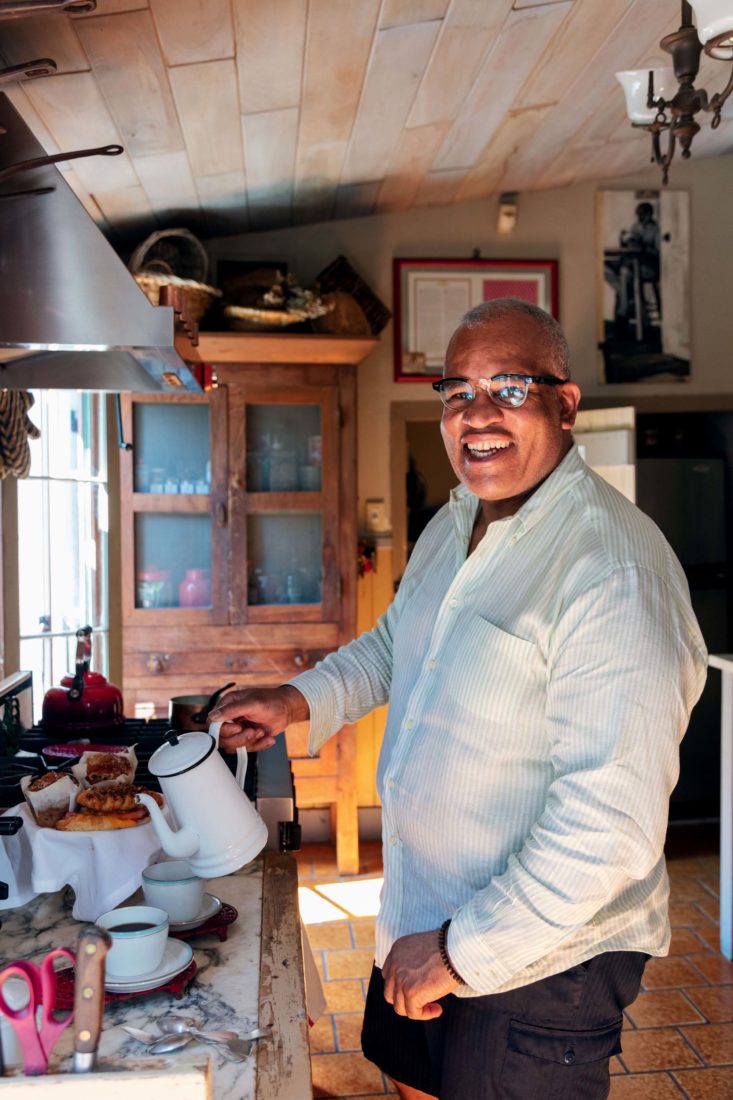 The cottage’s next major transformation came after Hurricane Katrina in 2005. “My house was undamaged, but without electricity for a month,” Moody recalls. “I came every day to sit on my doorstep and think. I decided to restore the house as closely as possible to its original design.” The Historic District Landmarks Commission signed off, and he began the revival, reinstating original dormers, adding a bathroom and a bedroom upstairs in what was traditionally storage space, and filling the home with pieces from his work and travels. The cottage is now the oasis of someone who champions beauty and history and surrounds himself with them. “I used to arrange my grandfather’s World War I uniforms when I visited him,” Moody says, “and I loved the old embossed buttons and the feel of the fabric. I have always delighted in beautiful old things.” Like many New Orleans Creoles, Moody is a storyteller, and each object in his home has its tale to tell. He situates blooming ginger from the backyard, for instance, in a nineteenth-century olive jar called a Biot—pottery often found in old New Orleans homes—to mirror the greenery in an adjacent still life of yellow tulips by the local artist David Garringer. Above the mantel hangs the first work in Moody’s collection of nineteenth-century paintings of gentlemen Créoles de couleur, which he initially spotted in Normandy, France, while on a buying trip for Lucullus. He couldn’t afford it at the time, “but it remained in my memory,” he says. Six years later, after losing touch with the dealers, he found them again in a Paris flea market. “The painting was there as though waiting for me. I bought it and hand carried it back to New Orleans.” As Katrina approached, he reluctantly left the painting behind. When Moody returned after the storm, the cottage doors were open, but all was intact. “I see the painting as the protector of the house,” he says. “The gentleman actually looks like my little brother. Now I just call him family.” The house has continued to evolve and morph as Moody has added pieces. “Something new comes in, and everything else shifts,” he says. “I love the light and the air. I live in the city, but I live in the country—the tropical country. I have birds, and I have a wilderness. I can just open the doors and be at one with nature.” And when the Creole shutters are drawn tight, he can even forget that his neighbors are an arm’s length away. “I am just the custodian of the house,” Moody says. “I am simply here to maintain it.” He has more than succeeded—he’s recreated a world the house’s original inhabitants would surely recognize.