This Coca-Cola-brined, double-smoked charcuterie board standout makes an impressive holiday centerpiece—and a fine Reuben, too “You try not to force things,” says chef David Bancroft, both of parenting in general and of guiding his eight-year-old son, Walker, to taking his first deer on a hunt last fall. “But it is definitely special to me to be able to really connect with your food source, and to make sure my children have an early opportunity to understand that.”

Hunting skipped a generation in Bancroft’s family; though both of his grandfathers were avid outdoorsmen, his father was not. Alabama transplants in Central Texas, Bancroft and his older brother adapted, learning to hunt with friends—a tradition he continued when he returned to Alabama to attend college at Auburn. He intended to study finance but discovered that he loved cooking more. In 2013, he opened Acre, and the parking-lot-garden-to-table restaurant quickly began attracting not just the Tiger football faithful, but also attention from the James Beard Foundation, which has three times named Bancroft a Best Chefs in America semifinalist. Bow & Arrow, Bancroft’s new barbecue joint, followed last year.

From his first deer, Walker wanted plenty of sausage and jerky, and ground meat in the freezer for “hamburger” helper. But Bancroft reserved one of the hams for an experiment. “I wanted to get cheffy with it,” he says. First, he treated the ham to an indulgent soak in a Coca-Cola brine, then smoked it over pecan wood for a base layer of campfire flavor, followed by a sous vide bath so that every milligram of meat cooked to uniform perfection. A second smoke gave the surface a deeper, richer color so that the finished product more closely approximated a true country ham.

With any recipe for curing meat, the details are important—preservation requires precise calculations. The recipe also takes time and some equipment, including a sous vide machine, that casual cooks may not own. But curing and smoking this ham are not much more involved than brining and roasting a turkey (much less deep-frying one). And like the big holiday bird, the results impress. Put the ham on the table whole as a centerpiece, or slice it for charcuterie and cheeseboards. Stacked on rye and topped with sauerkraut, it also makes an incredibly tasty Reuben.

A Note on Curing:

Curing meats requires precise measurements. The most precise measurements are by weight, not by volume. The formulas outlined in the ingredients list of this recipe provide Bancroft’s exact calculations for a ham regardless of its size. To begin, weigh the ham in grams, not kilograms. Multiply the weight in grams by each number in the cure recipe. For example: A 5-pound ham weighs 2,268 grams; multiply that by 0.025 to equal 56.7 grams of sea salt. For reference, 1 tablespoon of salt weighs about 17 grams. 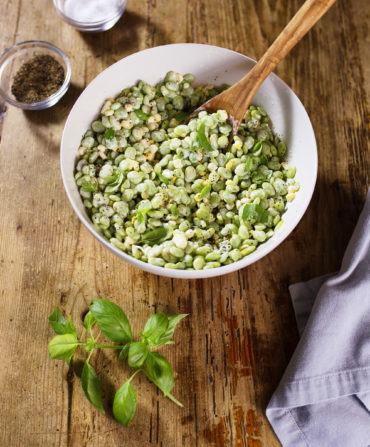 This fresh, creamy buttermilk salad is destined to become a picnic staple—especially when topped with bacon or okra