Cocktails by the Barrel An oak barrel filled with a cocktail is like a punch bowl with benefits.

Like a bowl, a beverage-loaded barrel turns you into a consummate host—you’re magically freed to mingle with guests and attend to other duties. Drinks are served by graciously gesturing to the barrel, next to which you’ve stocked glassware and ice. But unlike the punch bowl, a barrel performs another spell: It deepens and mellows cocktails, brushing out the burs and adding intrigue, making the drink rounder, more mature. The barreled-cocktail trend started in Portland, Oregon, around 2010, when a bartender named Jeffery Morgenthaler started experimenting with barrels, with encouraging results. He spread the word, and bartenders
in the South—a region intimately familiar with barrel making and barrel aging—took note. Bars began to look like wine cellars, with shelves lined with tidy rows of tiny barrels, each dispensing drinks by the ounce. The Shed at Glenwood in Atlanta, for instance, rolled out barrels with rotating cocktails aged for at least a month, including Sazeracs and Rusty Nails. Even haunts in less populous locales, like Lafayette, Louisiana’s Southern Social Table & Bar, offered up classic drinks aged in oak for at least three weeks.

Several Southern coopers—including Deep South Barrels in Texas and American Oak Barrel in Maryland—produce and ship casks of varying volume for the bar and home markets. A one-liter version will hold roughly a standard bottle of liquor, plus additional ingredients, and yields twelve to fifteen drinks. “It’s fun for consumers to experiment, especially if they try with a local spirit,” says Stephen Fedorchak of the Liberty Tavern in Arlington, Virginia. He suggests starting with the classics—Manhattans, old-fashioneds, Negronis. You can venture afield, he says, “but it’s a commitment of time and expense.” So take a few steps to make sure the end product really sings.

“I like to use liquor that hasn’t already seen a barrel,” says Shannon Healy, proprietor of Alley Twenty Six in Durham, North Carolina. A whiskey or brandy that’s spent years in a cask won’t be impressed by a few additional weeks, whereas gin or blanco tequila will swoon more over the prospect of oak. Avoid aging fruit juices, which may oxidize into off flavors inside the barrel. Instead, Healy infuses the liquor first. For his barrel-aged Pineapple Mezcal Cocktail, he soaks the fruit in smoky mezcal overnight. Then the infused spirit is strained, mixed with bianco vermouth and bitters, added to the barrel, and ignored so the oak can perform its hoodoo.

The resulting cocktail is tropics meet shady oak—the ripeness of the pineapple persists, suggesting that sense of Southern hospitality long represented by the green-crowned fruit. But the smokiness of the mezcal and the tang of the chocolate bitters complicate the drink, and softer vanilla notes from the barrel temper the outcome.

One other note: A barreled cocktail not only turns you into a great host but can also make you the best guest ever. Fill and pre-age a cask, then show up at a party, Saint Bernard–like, with a cocktail ready to tap. Later, leave the barrel for your hosts to use to entertain next time. It’s a pretty safe bet you’ll be high on the invite list next go-round.

For a 1-liter barrel 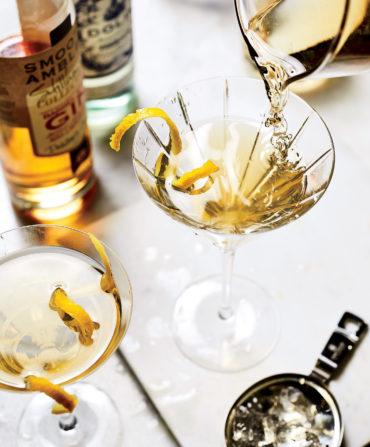 A spirit rediscovers its bygone days in the barrel More than a century after brandy fell out of favor, Southern distillers are turning their attention back to grapes