A slightly dangerous way to beat the summer heat Death in the Afternoon

If ever a drink conjured up the languor of a hot summer day, it’s the aptly named Death in the Afternoon. The absinthe-and-champagne concoction is credited to Ernest Hemingway and named after his 1932 treatise on bullfighting. The book is all about dichotomies: fear and courage, life and death. And the fiery anise taste of the absinthe—like hot licorice—pierced by the effervescence of chilled champagne is another testament to the allure of duality.

Absinthe has long given off an arty, dangerous aura, mostly due to the misconception that it held hallucinogenic properties. The spirit gained notoriety during the belle epoque, when the “green fairy” was muse to Parisian café society’s painters and poets. Stateside, it’s probably no surprise that New Orleans became the national absinthe capital. And thanks to the lifting of the nearly one-hundred-year-old ban on the spirit in 2007, the rituals of absinthe are back in vogue, although many visitors still believe they’re tasting something illegal. “People want to imbibe in the taboo, so we don’t ruin that for them,” says Joe Briand, who designs the cocktail menu at the Warehouse District restaurant Herbsaint. “We just let them enjoy the moment. It all adds to the mystery of the drink.”

Herbsaint is named after the anise-like spirit first produced in 1934 by New Orleanian pharmacist J. Marion Legendre as a legal substitute for absinthe. But the restaurant welcomed the return of the real stuff. “Suddenly we had so much quality absinthe to experiment with, which turned into some powerful drink experiences for the staff,” Briand says. He eventually settled on Marteau, an American-made absinthe produced with wormwood, aniseed, and fennel in the traditional nineteenth-century style, but with delicate grassy undertones. “It’s more nuanced, not like eating a handful of black jelly beans,” he says. The absinthe will still louche, or develop a beautiful milky opaqueness, as the flute fills up with champagne. “We also varied the original recipe of solely absinthe and champagne by adding vermouth, designed to bring down the alcohol level of the cocktail without masking the flavor of the absinthe. But a few Deaths in the Afternoon can still end your day pretty quickly.” 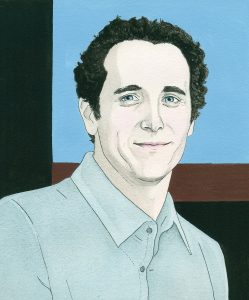 Drink philosophy: “I like my cocktails like I like my wine. I appreciate subtlety and balance more than a wall of flavor with very little complexity.”

Favorite cocktails: “I’m a Scotch man, but when I’m drinking mixed cocktails, I’m a sucker for a manhattan, and I love a good Salty Dog.”

Personal flourish: “I have a small tattoo on my chest that reads, 1er Cru, which means ‘first growth’ and is a reference to Burgundy, my favorite wine region on the planet.”